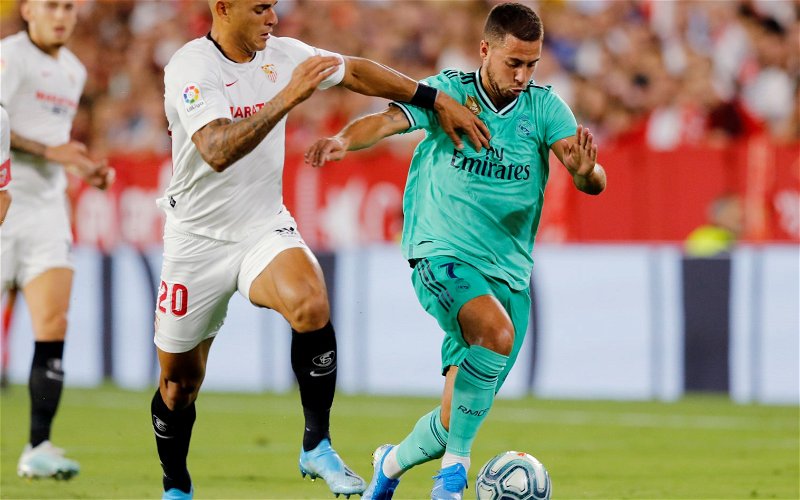 Many Liverpool fans have not been excited by the club’s transfer links with Sevilla defender Diego Carlos despite Jurgen Klopp reportedly being very keen on the 27-year-old.

Spanish media outlet Sport reported that the Liverpool manager sees the Brazilian as the ideal centre-back partner for Virgil van Dijk and is willing to meet the player’s €75m (£65.3m) release clause to land him, with Barcelona also interested in his signature. The transfer update was later shared on Twitter by @LFCTransferRoom.

? | Klopp wants to see Sevilla center-back Diego Carlos play next to Virgil van Dijk, and is willing to pay his release clause in order to get him to Anfield despite facing competition from Barcelona. [@SPORT] pic.twitter.com/cYpHBwbDRm

Carlos has been a regular in Sevilla’s line-up this season and made 31 appearances so far in the current campaign, scoring twice (as per TransferMarkt). His statistics hint that he is a no-nonsense defender, with match averages of 5.1 clearances, 1.2 successful tackles and one interception (as per WhoScored). However, he is not as adept in possession as Liverpool’s centre-backs – his 82.6% passing success rate is lower than any of Klopp’s current options in that position and lags behind the averages of Van Dijk (89.2%) and Joe Gomez (88.4%).

These Reds fans on Twitter aren’t keen on the prospect of Carlos signing for the club, with one Kopite feeling that Gomez is “10x the defender” compared to the 27-year-old:

Gomez is 10x the defender Diego Carlos is

Why does this link keep coming up? Don’t see it i see us signing this Ben White lad for £20-£25m and letting him develop behind VVD, Gomez & Matip not us spending £60-£70m on a CB who we’ve never heard of up until the last month

No interest at all

Why what’s wrong with Gomez ?

Never happening at that price. We have gomez and matip. A cheap young replacement will come in to replace lovren

Wouldn’t even put him above Gomez tbh, pointless signing for that much money, all we need is a good backup with matip once lovren has gone.

Gomez is better than him

Liverpool fans, do you think Carlos would be a good addition to the squad or is he overpriced and inferior to Klopp’s current centre-back options? Join in the discussion by commenting below!