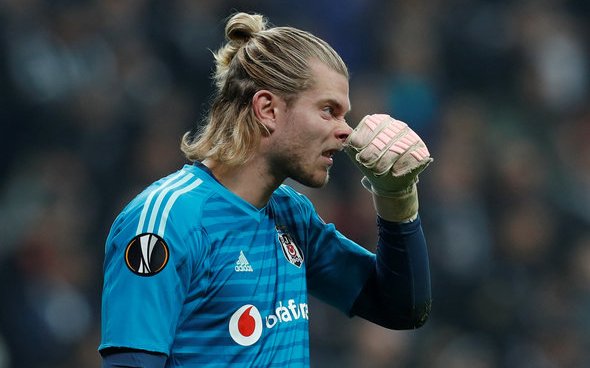 A number of Liverpool fans are hoping that the club will dispense with Loris Karius for good after he made a sudden return to Anfield.

As reported by Turkish media outlet NTV, the German goalkeeper has terminated his contract with Besiktas, where he had been on loan since summer 2018, and is now due to go back to his parent club.

The Daily Mail noted that the 26-year-old had made a complaint about the Turkish club to FIFA, accusing them of withholding payment of his wages for periods when he hasn’t played. Besiktas board member Erdal Torunogullari said in an Instagram post that the club didn’t want to make what he described as “an undeserved payment”.

Karius infamously made two costly errors in Liverpool’s Champions League final defeat to Real Madrid two years ago and has endured some tough moments during his loan spell in Turkey, too. He was culpable for a horrendous misjudgment leading to a goal for Slovan Bratislava in a Europa League defeat last autumn and, as noted by Fotospor, blamed the positioning of floodlights in Turkish stadia for a series of errors which had led to criticism of his performances.

These Liverpool fans on Twitter hope that the Anfield club will move him on, with one Kopite calling on sporting director Michael Edwards to work his “magic” and strike a good deal for the sale of Karius:

Now he can do the same thing with LFC contract

Go Edwards! Do your magic and sell him for a really good price!

He shouldn’t get another chance with us as the stigma and mentality of playing for us after Kiev would make it too much pressure.

Isn’t as bad as made out though and was pretty good before Kiev, but that just ruined him.

He’s better than Adrian but can’t play for us.

Nothing to discuss. Klopp believes in 2nd chances but in this case, Karius definitely isn’t getting one.

Never want to see him in a Liverpool shirt again.

We need to release him.

Should Liverpool give Karius a chance to redeem himself or is it time for the Reds to simply cut their ties with the goalkeeper once and for all? Comment below with your views!