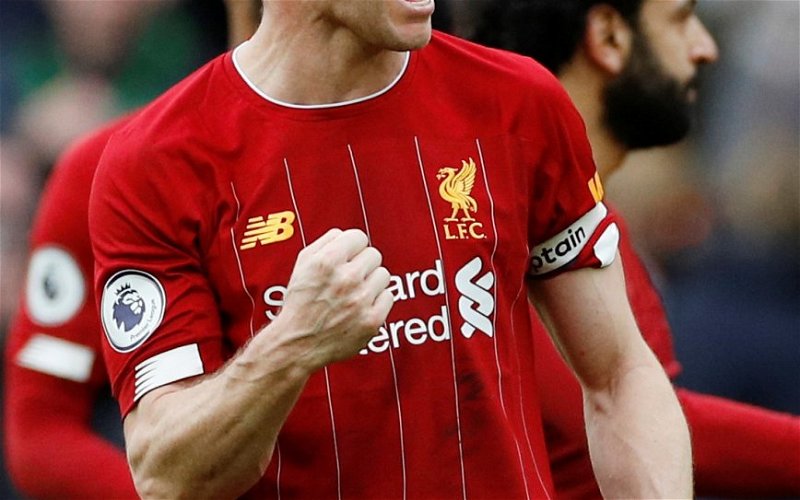 Plenty of Liverpool fans have lauded James Milner after the club’s official Twitter account @LFC posted a compilation of his goals from the season so far.

The 34-year-old, who is the oldest outfield player in Jurgen Klopp’s squad and the club’s vice-captain, has found the net four times this season, three of those from the penalty spot. Having opened his 2019/20 account with a strike from the edge of the penalty area in the Carabao Cup win over MK Dons, he then slotted a stoppage time penalty winner against Leicester in the Premier League a few days later. He added further penalties in the Carabao Cup tie against Arsenal and the 4-0 thrashing of Leicester on Boxing Day.

A midfielder by trade, Milner has displayed tremendous versatility during his time at Liverpool, playing in the middle of the park as well as on the wings and in both full-back positions (as per TransferMarkt). Also, despite his advancing years, he has shown little signs of slowing down, featuring in 33 games this season and showing incredible willpower to pull off a heroic goal-line clearance in last month’s 2-1 win over Bournemouth.

These Reds fans on Twitter enjoyed the compilation of goals from a “great leader” who has continued to prove his value to Klopp’s team in recent months:

Has to be up there as one of the clubs best signings ever. Got him on a free, great leader, consistent, he’s a top pro

One of the best free signings ever

Milner has proven to be an absolute steel of a buy, I couldn’t believe it when City we’re willing to let him go. Absolutely love Milly, top quality player who just keeps on producing the goods for our wonderful team! ?YNWA

Liverpool fans, did you enjoy the compilation of Milner’s goals? Just how vital a player has he proven to be this season and throughout his time at the club? Have your say by commenting below!