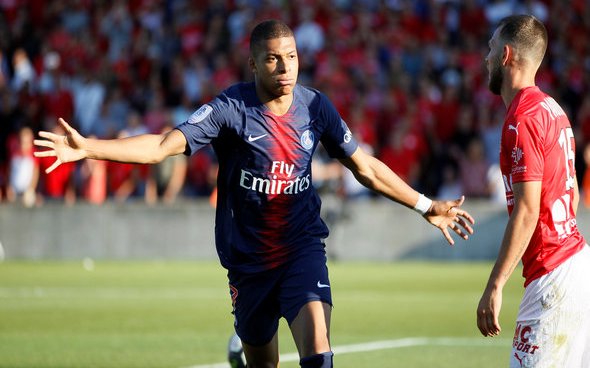 Plenty of Liverpool fans have been reacting to comments made by French football expert Cyril Morin in which he cast doubt on Kylian Mbappe’s suitability to the Reds.

Amid reports of an offer being made to PSG for the 21-year-old [El Desmarque, via HITC], the journalist told Eurosport‘s ‘Game of Opinions’ podcast: “There are two main reasons that Liverpool and Mbappe can’t fit together. Firstly, Klopp’s philosophy. For me, Mbappe isn’t mature enough to assume the gegenpressing. He’s still a young striker in terms of intensity and defensive effort, and I’m not sure he is mature enough to sign for Liverpool where you have to be part of the team, not one among 11.

“Secondly, the history points towards Mbappe to Real Madrid. He is a fan of the club and there is Zidane, which will play a huge role. It might be interesting to imagine Mbappe at Liverpool, but for me there is no way.” His comments were later shared on Twitter by @AnfieldEdition.

French football expert Cyril Morin: “There are two main reasons that Liverpool and Mbappe can’t fit together. For me, Mbappe isn’t mature enough to assume the gegenpressing.

"I’m not sure he is mature enough to sign where you have to be part of the team, not one among 11.” pic.twitter.com/8Zcg0MxJ3g

As explained by Jonathan Wilson on Sky Sports, Klopp has pioneered a gegenpressing strategy at Liverpool which involves his players putting immediate pressure on opponents to win back possession – Mbappe has made only 0.4 successful tackles and 0.2 interceptions per game this season, whereas Reds forwards Sadio Mane and Roberto Firmino have averaged one or more successful tackles per game.

Morin’s apparent reservations about Mbappe’s attitude come a few weeks after the PSG forward reacted angrily to being substituted against Montpellier, which was not the first time that he openly complained to his manager Thomas Tuchel about being withdrawn from a match (as per AS).

These Liverpool fans also had their doubts about the 21-year-old coming to the club, with the player valued at an eye-watering £162m (as per TransferMarkt):

This link needs to go away, we will not sign Mbappe. He’s a quality player etc but not worth the price. A player like Werner will give you very similar abilities for probably a quarter of the fee, not to mention wages & so on. Mbappe is 100% not worth the rumoured price!

Yeah we are 11 battalions

Do you really want him anyway,who out of mo,bobby,Sadio would you drop…….

He’s good, I like him. But not now. The market is inflated and his wages will destroy the structure of the club.

Liverpool fans, do you think Mbappe could be a disruptive influence if he were to sign for the Reds? Do you think it is likely that he will swap Paris for Anfield? Comment below with your views!