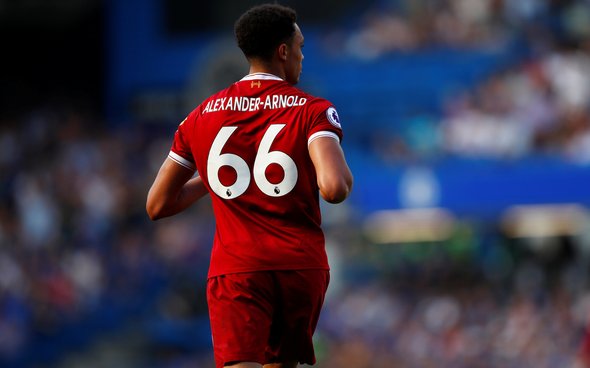 Aside from his regular provision of assists, many Liverpool fans hope that Trent Alexander-Arnold will keep doing one other thing during his time at Anfield.

With the 21-year-old establishing himself as the Reds’ first choice right-back over the past couple of seasons, Empire of the Kop asked on Twitter (via @empireofthekop) whether he would continue to wear the number 66 shirt or switch to a lower number to perhaps better reflect his status as a first team mainstay.

Will Trent always wear the no.6, or will be move to a different number between 1-11 later in his career? ? pic.twitter.com/pPPQ7Rk6U0

Alexander-Arnold has worn number 66 from the moment that he broke into Liverpool’s senior squad during the 2016/17 season and has gone on to make 125 appearances in that shirt, with an impressive haul of 34 assists recorded in that time from the right-back position. Nobody has set up more goals for the Reds (14) than him in the 2019/20 season so far, while he has already played in two Champions League finals (winning one) for the Reds and been included in the PFA Team of the Year last term, along with being nominated for the 2019 Ballon D’Or.

These Liverpool fans hope that he will stick with the number 66 throughout his career and, as the only player so far to wear that number for the Reds, go on to become synonymous with it for years to come:

I think he should stick to the No. 66 (not 6 as you posted) and make it legendary

It’s original and he should keep it. He will make the number iconic in football.

Can’t imagine him wearing any other number now tbh mate, 66 is iconic to him in my view

Why not keep 66, its different and I think he may have become attached to it

Wear no.66 all of his career and then we retire the shirt when he’s at legend status ??

This number is his trademark and he should keep it ? everywhere you seen number 66 reminding you about TAA?he made this number famous ?

Liverpool fans, would you like to see Alexander-Arnold keep number 66 as a symbolic number or do you think he should be given a lower shirt number to reflect his first team status? Have your say by commenting below!