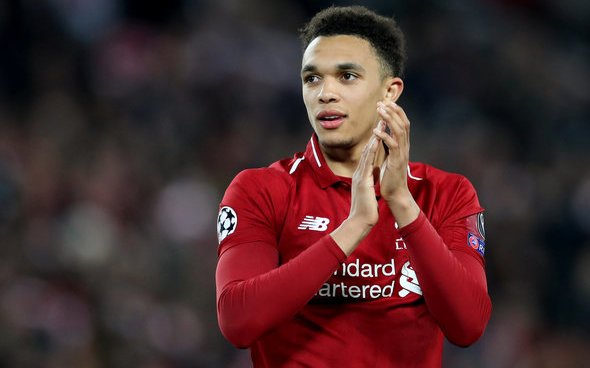 A number of Liverpool fans have saluted Trent Alexander-Arnold after the young Reds defender’s show of support for healthcare staff in one of the city’s hospitals.

The 21-year-old posted a video on his Twitter profile @trentaa98 in which he confirmed that, in conjunction with Under Armour, the sportswear brand with whom he has a partnership, he is contributing towards the donation of more than 2,000 products to “the amazing workers” at Royal Liverpool Hospital.

Alexander-Arnold told followers: “As everyone knows, I’m Liverpool through and through and this city means everything to me. I’ve been so inspired by all the work that the doctors, nurses and key workers have been doing through this very difficult time.” He finished with an uplifting message of hope, insisting that “we will get through this together”.

This city means everything to me. So together with @UnderArmourUK, we're providing over 2000 products to the amazing key workers at @LivHospitals ???? #ThroughThisTogether pic.twitter.com/VzUtZB9M4V

His show of support comes just a few days after Liverpool captain Jordan Henderson played a proactive role in the establishment of #PlayersTogether, an initiative from numerous Premier League players with the mission of raising and donating funds for NHS staff and patients amid the coronavirus pandemic. Yesterday, ground staff at Anfield showed their support by displaying a message of “NHS YNWA” underneath a heart symbol on the stadium’s pitch, as shown in an aerial image tweeted by the club’s vice-president of communications Craig Evans (@CraigEvans_LFC).

These Liverpool fans on Twitter commended Alexander-Arnold for his part in Under Armour’s donation towards frontline staff at Royal Liverpool Hospital:

Could you love him any more right now?

Well done Trent, we are so proud of you and happy to have you. You are not only an amazing player but also a wonderful human being ?

Is right Trent. You mean the world to us lad

What do you make of this gesture from Trent Alexander-Arnold? You can share your messages in the comments section below.