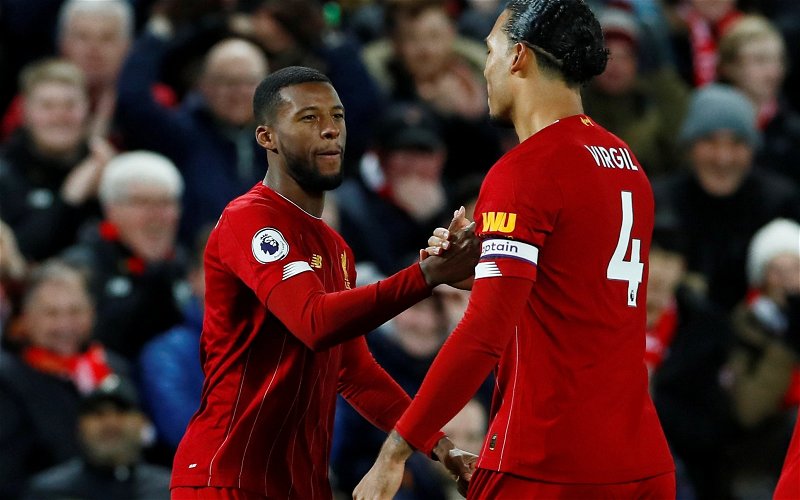 In an interview for liverpoolfc.com, the 33-year-old described the midfielder as “an incredible person”, adding that “his energy is incredible, he has lungs for days and saying: “He’s very complete – he can score goals, he can tackle, can defend, recover balls. Gini’s development is also incredible.”

Babel went on to say of Van Dijk: “If you see how he developed since coming to Liverpool, his focus is incredible – 90 minutes fully sharp. Now with the leader that he’s become, he definitely deserves it. He’s also very important for us in the Dutch team and a great captain. Much respect to him.” A link to his interview was shared by @LFC on Twitter.

"His energy is incredible, he has lungs for days. You can tell when he has the confidence, he's unbeatable and very hard to play against." ?@Ryanbabel has used the word 'incredible' to best describe the qualities of @VirgilvDijk and @GWijnaldum ?

Wijnaldum has the best passing success rate (90.9%) of any Reds player to start regularly and, in addition to his five goals in all competitions, has averaged one successful tackle, 0.5 interceptions, 1.2 successful dribbles and one successful aerial duel per game in 2019/20 (as per WhoScored). Van Dijk, the reigning PFA Player of the Year, has been ever-present in the Premier League for Liverpool this season, helping them to boast the division’s best defensive record of only 21 goals conceded, having shipped just 22 in the league last term with him starting every game.

Following Babel’s praise of the “incredible” Netherlands duo, these Liverpool fans on Twitter also lauded the pair, who one Kopite hailed as “Beauty and the Beast“:

Beauty and the Beast?

That is just a small word for the best defender and best midfielder in the world?

Gini deserves way more respect than he gets

I concur with babel’s comments, with Gini and Virgil at the center the defense line is perfect

Liverpool fans, would you concur with Babel’s glowing praise of Wijnaldum and Van Dijk? Have your say by commenting below!