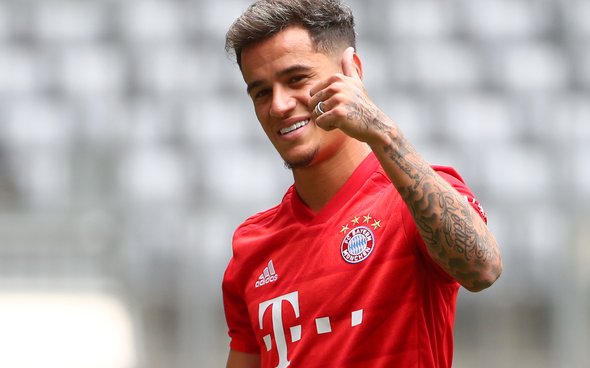 Plenty of Liverpool fans have scoffed at a journalist’s claim that former Reds player Philippe Coutinho could end up at one of their long-standing rivals.

In a Q&A for Bleacher Report, Dean Jones was asked about possible destinations for Barcelona’s Brazilian playmaker and said that “Everton is more feasible than you’d imagine”. That claim comes in the wake of Football Insider reporting that the Toffees had shown an interest in the 28-year-old and were allegedly told that they could land him at a discounter price or on loan.

Really?! Nahhh – they could probably afford him but no way would Coutinho sign for the Toffees. Would he?! ?? https://t.co/PW004pSHpJ

Coutinho, who is currently on loan at Bayern Munich from the La Liga giants, scored 54 goals in 201 games during a five-year spell at Liverpool before his £142m move to Spain in January 2018. Spanish media outlet Sport had claimed [via Daily Express] that he could return to Anfield in the summer, but a subsequent report from The Mirror stated that the Reds have “zero interest” in signing him for a second time.

These Liverpool fans on Twitter firmly believe that there is no chance of the former Reds playmaker signing for their Merseyside rivals – one Kopite thinks that Coutinho is “nailed on to join Chelsea” following a report from Sky Sports that he has been offered to the Londoners:

Nailed on to join Chelsea

Coutinho went to Barca to win things and because it was a dream to play there. At Everton he will never win things and no sane person have a dream about playing for them, so its a NO from me.

Nah he’d have much better offers.

I think he’ll go back to Inter Milan.

Liverpool fans, were you shocked to hear Everton’s name being so strongly linked with a possible move for Coutinho? Give us your thoughts in the comments section below!