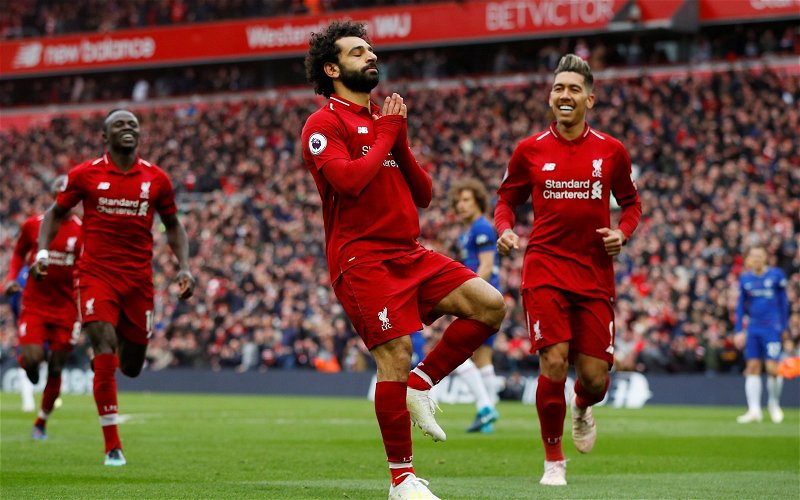 Plenty of Liverpool fans have been fondly harking back to a special moment from Mohamed Salah this day last year.

On 14 April 2019, the Egyptian winger lit up the Reds’ Premier League clash against his former club Chelsea with an unstoppable strike from 25 yards out which fizzed past Kepa Arrizabalaga and into the top corner of the visitors’ net, with a clip of the goal shared on Twitter by @LFC.

One year ago today, @MoSalah netted this absolute stunner vs @ChelseaFC ? pic.twitter.com/mq3DuLAYtk

That stunning effort doubled Liverpool’s lead shortly after Sadio Mane had opened the scoring on 51 minutes and the Reds went on to defeat the Londoners 2-0, a win which maintained their pursuit of Premier League leaders Manchester City in a relentless title race and gave them a first Anfield victory over the Blues in nine attempts over seven years.

That was Salah’s 19th league goal of last season and he would finish the campaign with 22, sharing the Golden Boot with Mane and Arsenal’s Pierre-Emerick Aubameyang. Unfortunately, though, his heroics weren’t quite enough to prevent Manchester City from pipping Liverpool to the title.

These Reds fans on Twitter enjoyed recalling the Egyptian’s “masterclass” against Chelsea one year ago today:

This is Mohamed Salah

Took your breath away that goal. Last thing i was expecting was a shot. You always expect @MoSalah 2 dribble past 2 or 3 defenders 1st.

It’s the noise it makes when it hits the back of the net ??

Liverpool fans, what are your memories of Salah’s long-range rocket against Chelsea? Is that the best goal he has scored for the Reds? Share your thoughts in the comments section below!