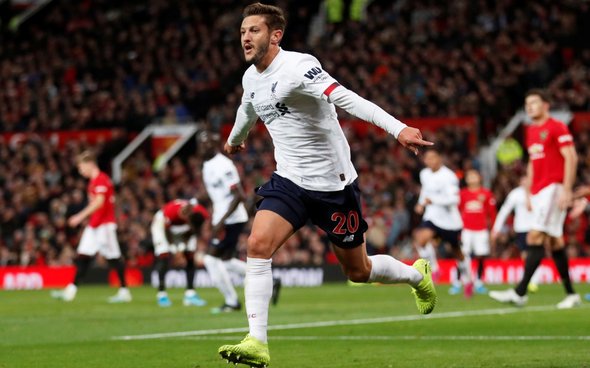 Many Liverpool fans have praised Adam Lallana after the midfielder was lauded by Watford striker Troy Deeney at the weekend.

Speaking to The United Stand [via Liverpool Echo], the Hornets ace claimed that the 31-year-old “walks into 90 per cent of teams” and believes that Manchester United, Tottenham, Everton and Chelsea would all take him. He added that Lallana “could play for Man City” if they weren’t “overpopulated” in the midfield sector. Deeney’s comments were shared on Twitter by @AnfieldEdition.

Troy Deeney: “I was just chatting about this with my mates in our group chat – Lallana walks into 90 per cent of teams.

"He could play for Man City but I think they’re overpopulated… you would take him at United.

The Watford striker, who scored as his team ended Liverpool’s unbeaten status in the Premier League in February, has regularly spoken highly of the Reds. He recently told BBC that Jurgen Klopp’s “great” team deserve to be champions and called for the season to be played to a conclusion and he described them as “unbelievable” (as per The Mirror) even after his team’s 3-0 win over the league leaders a few weeks ago.

Lallana is the second-longest serving player at Liverpool, having joined the Reds six years ago, scoring 22 goals in 178 games in his time at Anfield. However, he has been beset by numerous injuries and has started only nine league games since summer 2017, with the Liverpool Echo claiming that he is likely to leave in the summer when his contract expires.

These Reds fans on Twitter lauded the 31-year-old following Deeney’s claims about him, with one Kopite believing that Lallana is “underrated“:

True he’d of done a job or be a bigger part had he’d stayed injury free I feel for the guy.

He’s not wrong. He’s a talented player but injuries robbed him of a good career

Very underrated player imo , not quite good enough for the top like us and city but like deeney said , gets into most teams

Injuries destroyed his Liverpool career. Prime Lallana of 2017 was unplaybe against. He was the real definition of a creator in the classic 3 man midfield

We are spoiled at LFC.
Lallana and Lovren would walk into every other team, but get battered by a small section of our fans.

secret Liverpool fanboy Mr Deeney isnt he? ? but i agree i think hes a cracker

Liverpool fans, do you agree with Deeney’s belief that Lallana would get in most Premier League line-ups? What have you made of the midfielder during his time at Anfield? Have your say by commenting below!