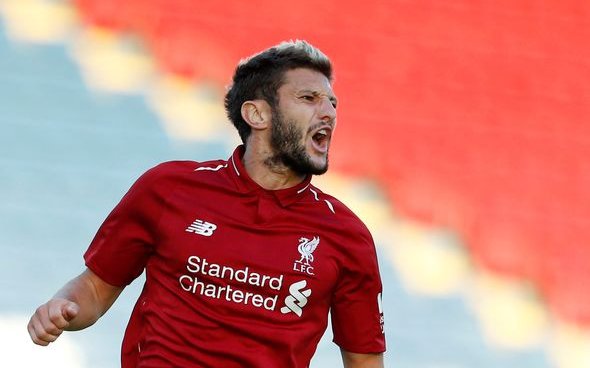 He may not be a regular starter for Liverpool any longer but it seems that plenty of Reds fans still have a lot of time for “underrated” midfielder Adam Lallana, judging by their reactions to a video posted by the club’s official Twitter account @LFC this afternoon featuring some of his goals in a red shirt.

The 31-year-old, who came to the club in 2014, has been tipped to leave Anfield this summer (as per Liverpool Echo) once his contract expires in June. If that materialises and he doesn’t score before then, he will depart the club having struck 22 goals in his time with the Reds.

That number could have been significantly higher were it not for two lengthy hamstring injuries suffered in 2017/18, having gone into that summer off the back of an excellent campaign in which he plundered eight Premier League goals and started the vast majority of games for the Reds.

The compilation of Lallana’s goals shared by @LFC includes his memorable winner in a dramatic 5-4 victory at Norwich in 2016, a powerful strike in a 4-1 win over Leicester and his goal against Middlesbrough on the final day of 2016/17 when the Reds ensured their return to the Champions League.

These Reds fans on Twitter hailed the midfielder after seeing some of his goals – one Kopite tweeted that he is “better than Werner“, a reference to the RB Leipzig striker who has been strongly linked with a move to Anfield this summer:

I love Lallana so so much

@TOM_GODDARD_22 my god prime lallana was a bit good

give him a new contract NOW

What have you made of Lallana during his time at Liverpool? Do you think he could have been a key figure over the last three seasons had it not been for those hamstring injuries in 2017/18? Comment below with your views!