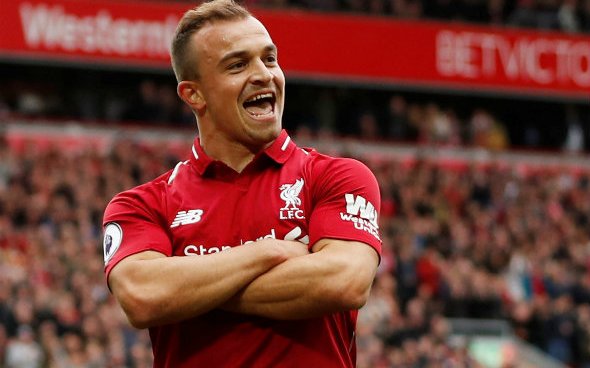 Plenty of Liverpool fans have lauded Xherdan Shaqiri on Twitter after @AnfieldEdition asked followers to rate the Swiss winger’s Reds career out of 10, with reports of a probable summer exit for the 28-year-old.

The Liverpool Echo recently claimed that Shaqiri is expected to leave Anfield in the coming months and is valued at £25m by director of football Michael Edwards, having been bought from Stoke for £13.5m (as per Evening Standard) in 2018.

If Xherdan Shaqiri leaves Liverpool this summer, what would you rate his career at Anfield out of 10? pic.twitter.com/6Hly4JVixW

The Switzerland international enjoyed a hot scoring streak in the latter months of 2018, a run which included two goals off the bench in a 3-1 win over Manchester United. Although he struggled for starts in the latter half of the season, he started the epic Champions League semi-final win over Barcelona and provided the cross for Georginio Wijnaldum’s second goal in the 4-0 triumph at Anfield (as per BBC).

Unfortunately, Shaqiri has endured a succession of injuries since last summer and he has started just two Premier League games all season, playing only 256 minutes in all competitions. However, even if he were to leave in the next few months, these Liverpool fans on Twitter are likely to remember him very fondly for what he has contributed:

10 just for the brace against United

Premier league & champions league winner for us… played V Barca in our 2nd greatest ever come back. Stepped up when he had to. Unlucky he hasn’t had more minutes.. tough team to get into. #lfc he’ll always be loved think that says a lot

7. Really good considering his price tag. Valuable contributions when we needed him to fill in. United, the derby and Barca. It seems like there has to be another issue besides his injuries ? All in all, his time should be looked at in a positive light ??

9, hasn’t put a foot wrong and played a vital part against Barcelona

Solid 8/10 he was unbelievable in @ChampionsLeague against @FCBarcelona at Anfield those crosses ???????

8 – he was fantastic everytime he started imo

10 for the assist to Wijnaldum

How would you rate Shaqiri’s Liverpool career out of 10? Has he been a disappointment or do you think he’s performed well when called upon? Share your views in the comments section below!