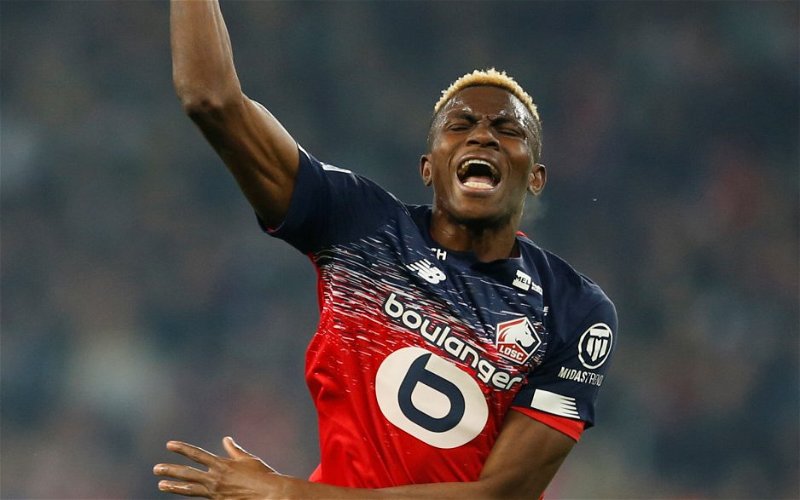 Plenty of Liverpool fans have been reacting to transfer reports linking the club with a striker who has netted 18 goals this season – although many Reds aren’t overly excited.

French media outlet Le10 Sport claimed that the Anfield club have commenced talks to sign Lille centre-forward Victor Osimhen, who has also been targeted by several other teams in the Premier League and who has been the subject of offers from around Europe. The 21-year-old would reportedly command a fee of €70m-€80m (£60.9m-£69.6m), with the story subsequently shared by @LFCTransferRoom on Twitter.

Liverpool have begun negotiations with Victor Osimhen representatives. There’s interest coming from all over Europe for the Lille forward, but the chances of him moving to England are greater. President Gerard Lopez confirmed he’s received a few offers for him. [@Le10Sport] pic.twitter.com/CJpFHD0CGc

The Nigerian has found the net 18 times in 38 games for Lille in the current campaign, with two goals in the Champions League group stage during his first season with the French club (as per TransferMarkt). He has tremendous aerial prowess, winning an average of 4.4 headers per game, and a match average of 3.2 shots would suggest that he has a natural instinct to have a pop at goal (WhoScored).

However, in the context of Liverpool’s reported interest in RB Leipzig’s 27-goal striker Timo Werner (as per Sky Sports), these Reds fans on Twitter don’t seem too enthusiastic about being linked with Osimhen:

Werner is better and can play wide too

@LFC it’s pretty clear to everyone that we all Werner.. come on guys ?

If we can’t scrape our 50 mil for werner, we won’t be getting this guy, there asking for atleast 70mil

Personally think we should go for werner

this is Instead of Werner

Liverpool fans, what was your reaction to discovering that the Reds are reportedly in talks to sign Osimhen? Have your say by commenting below!