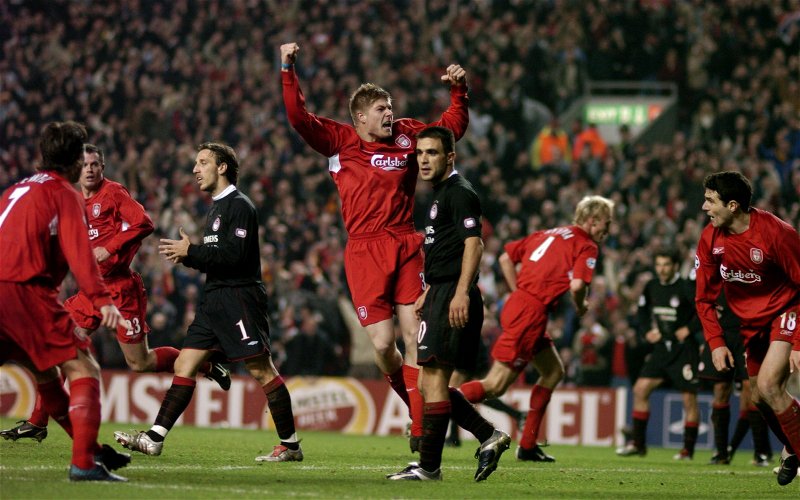 Plenty of Liverpool fans were in good spirits as they reacted to a video on Twitter from former Reds striker Neil Mellor (@NeilMellor33) depicting a famous Anfield moment.

The Sky Sports pundit claimed an assist for Steven Gerrard’s crucial late goal against Olympiakos in 2004, which sent Liverpool into the Champions League knockout rounds in the season that they ultimately won the tournament for a fifth time.

With the assistance of his family, Mellor recreated that iconic goal, reprising his role of cushioning a downward header to Gerrard, portrayed in this instance by his son Harry. His daughter Nicole, who initially posted the video to her TikTok profile, threw up the ball for her father to head it on for Harry to strike it past the rather belated dive of wife Rebecca, in the guise of beaten Olympiakos goalkeeper Antonis Nikopolidis.

Looking for a Liverpool Gift? Take a look at the dedicated Liverpool Fan Gifts site for the latest reviews, shopping advice and links to the best products in the market. With new items added daily this should be your #1 destination. They have everything from the latest and classic Shirt as well as memorabilia, toys and gifts.

The video elicited plenty of reaction from Liverpool fans on Twitter, some of whom humorously called out a foul throw and the reactions of the goalkeeper. One Kopite jokingly asked if the ‘keeper was Jordan Pickford, the Everton number one who has been culpable of some mistakes this season:

That Pickford in goal? ??

the keeper goes a bit late….

Foul throw, VaR would have never allowed it

Liverpool fans, did you enjoy the Mellor family’s recreation of Gerrard’s goal against Olympiakos? Share your views in the comments section below!