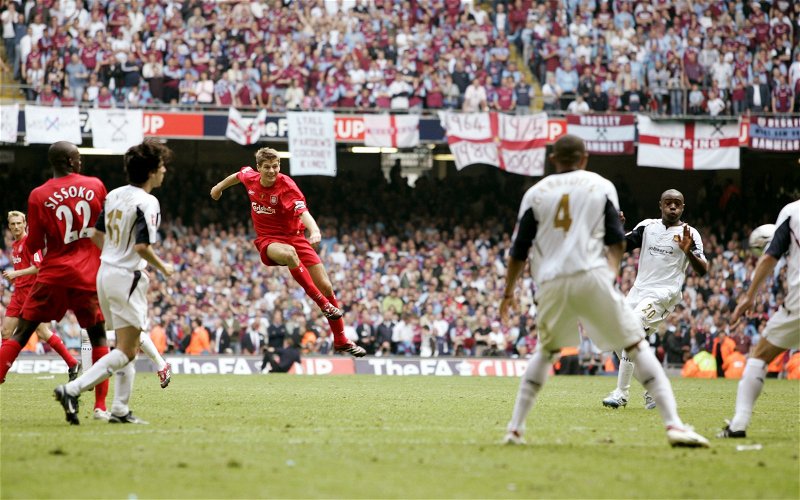 Plenty of Liverpool fans shared their memories of Steven Gerrard’s stunning FA Cup final strike in 2006 after it was chosen by The Athletic‘s James Pearce as his favourite Reds goal.

The Merseysiders were trailing West Ham 2-3 going into stoppage time in the cup showpiece at Cardiff’s Millennium Stadium when their captain ran towards a loose ball 35 yards from goal and hit a thundering volley that fizzed past Hammers goalkeeper Shaka Hislop and into the net (as per BBC). That was Gerrard’s second goal of the afternoon and it took the game to extra time and penalties, with Liverpool triumphing in the shoot-out to win their seventh, and most recent, FA Cup. As Pearce put it, “the technique, the power, the accuracy, the timing and the grandness of the occasion combined means it belongs in a class of its own” [via The Athletic and @JamesPearceLFC].

The technique, the power, the accuracy, the timing and the grandness of the occasion combined means it belongs in a class of its own.
The story of Steven Gerrard's thunderbolt in the 2006 FA Cup final – my pick for Liverpool's greatest goal. #LFC https://t.co/kDR48NpJ6q

The Reds won that cup final the hard way after going 0-2 behind in the first half, a Jamie Carragher own goal and a Dean Ashton strike putting West Ham in a dominant position. Liverpool later restored parity before future Anfield player Paul Konchesky produced a howitzer from the wings to nudge the Hammers ahead once more. After Gerrard’s timely intervention, Pepe Reina saved three penalties in the shoot-out to decide the final in Liverpool’s favour. [via BBC]

These Reds fans on Twitter gave their own views on the sensational 90th-minute equaliser from Gerrard that day:

I was saying to me best mate “as soon as the whistle goes, we are off, not hanging round to watch West Ham lift the cup”. Turned my head to the pitch, BOOM! #ynwa #Increíble pic.twitter.com/9vHOIUT4T1

What a day absolutely beautiful went to Cardiff on my own from Dublin 250 pounds for my ticket worth every penny. #stevegfinal

That goal would be forever etched in my memory

I remember watching it as a kid on a crappy small TV with so much static, took a look at the amount of added minutes, then the ball was suddenly in the net. It was nuts

What a day that was. I remember walking through the city after the game and west ham supporters were clapping us, the fans. Incredible. I’ll never forget that. Great occasion.

Can’t argue with that, I’m sure for a split second the whole stadium fell silent in disbelief when that hit the back of the net, hear a pin drop proportions, then boom the roof come off ????

Liverpool fans, was Gerrard’s last-gasp FA Cup final strike one of your favourite Reds goals of all time? Comment below with your views!