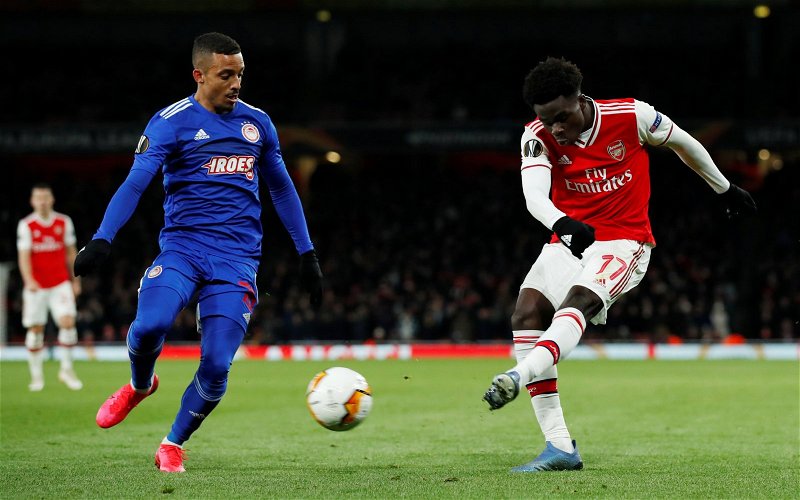 Plenty of Liverpool fans would like to see Bukayo Saka being signed by the Reds after reports of the Anfield club’s interest in the Arsenal teenager.

A report from Football London claimed that the Reds are interested in the 18-year-old, who is entering the final year of his current £7,000-a-week contract with the Gunners and has not yet any talks about a new deal at the Emirates Stadium. Those details were also shared on Twitter by @LFCTransferRoom.

Arsenal are yet to revive contract talks with Bukayo Saka as the youngster approaches the final 12 months of his deal at the Emirates Stadium. (@Football_LDN)

Saka, who was used as a left winger by Unai Emery at Arsenal earlier in the season before being switched to full-back by Mikel Arteta, has established himself in north London this term with 30 first team appearances for the Gunners, chipping in with three goals and nine assists. He has averaged 1.8 successful tackles, 1.4 successful dribbles and 0.7 key passes per game in the 2019/20 Premier League and has a passing success rate of 81.6% (as per WhoScored).

These Liverpool fans on Twitter have called on the Reds to bring him to Anfield as a left-back alternative to Andrew Robertson, currently the only natural player in that position in Jurgen Klopp’s senior squad:

He’s definitely worth signing ? immediate cover for both LB and LW plus what a prospect in the future. Get it done @LFC

Can you imagine saka – Trent as our fullback duo. Sorted for a decade

Would take him in a heartbeat. Cover for both Robbo and Mané while being quality and having a lot of potential.
With Tierney returning from injury, he would be not be a guaranteed starter at Arsenal

Yes please get this done asap

And Arsenal out here cutting his wages by 12.5%, would be a cracking addition to Liverpool’s squad, Elliott & Saka on the wings would bode very well for years to come

Get him down to Blackpool for Klopp to persuade him to run his contract down and join us only for a bit of compo. How much would he be to buy at the end of the season with 1 year left?

Robbo could use some competition. Larouci just isn’t good enough to be our only natural left back besides Robbo. Millie can do a job there but Saka is on another level and is constantly improving.

Liverpool fans, would you like to have Saka at Anfield? How likely is it that the Reds could sign him? Share your views in the comments section below!