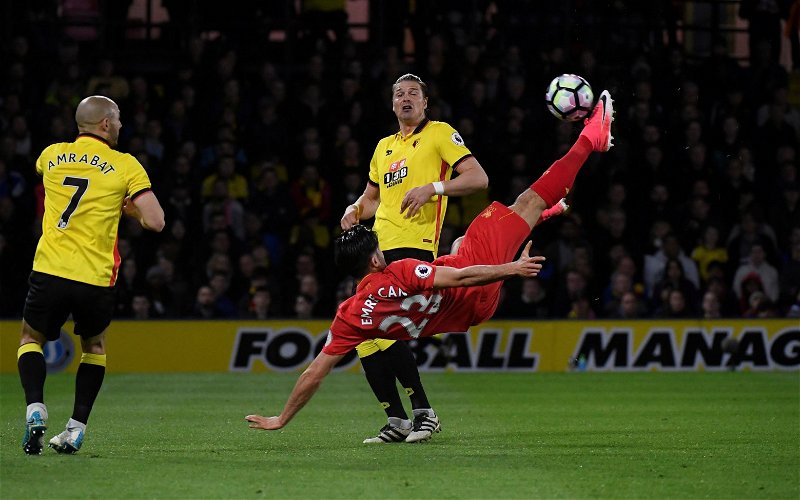 In a Premier League season dominated by Chelsea and Tottenham, the race for the third and fourth Champions League spots seemed like one that nobody wanted to win as April turned to May.

A week after Liverpool lost at home to Crystal Palace, their nearest pursuers Manchester City, Manchester United, Arsenal and Everton all dropped points prior to a Monday night visit to Watford for Jurgen Klopp’s side. The Reds had won the reverse fixture 6-1 earlier in the season to go top of the table but had been thrashed 3-0 on their previous visit to Vicarage Road.

Klopp acknowledged before the match that the slip-up of top four rivals would be irrelevant if his own team failed to take advantage and the night did not begin in auspicious fashion for the Reds as Philippe Coutinho went off injured. Adam Lallana, himself only returning from a thigh problem, came on for the Brazilian and produced one of the first half’s precious few chances as he crashed a volley against the Hornets’ crossbar.

A dull opening 45 minutes looked set to end scoreless as, two minutes into added time, Liverpool launched an attack. Lucas Leiva looked up before delivering an inviting diagonal pass towards the penalty area. Emre Can moved to try and meet the ball with an acrobatic mid-air twist and caught it with a sumptuous bicycle kick that ended with the ball flying past Heurelho Gomes and into the Watford net. It was later voted as the Carling Goal of the Season and was rightly described by Bill Leslie in commentary for Sky Sports as “a moment to savour“.

In a tight battle for the top four, and with Liverpool absent from the competition in the previous two years, the significance of the goal was not lost on Can, his team-mates or Klopp as they celebrated this moment of magic unreservedly.

Watford had offered little in the first half but improved after the interval, with Etienne Capoue and Daryl Janmaat forcing good saves out of Reds goalkeeper Simon Mignolet. Liverpool had seized control of the game in first half stoppage time but would end up having one last set piece to defend in time added on at the end of the 90 minutes.

A set piece from the home team was delivered into the Reds’ penalty area and, as the away defence failed to deal with it, the ball was flicked on to defender Sebastian Prodl, whose fierce effort crashed off the upright to spare Liverpool’s blushes.The Reds held on for the win after that nervy finish and went four points clear of fifth-placed Manchester United, although their three closest challengers all had games in hand.

It felt like a pivotal win at the time and it would prove to be exactly that come the season’s end. Liverpool ended the campaign in fourth place just one point ahead of Arsenal, thus gaining entry to the Champions League for 2017/18. Can left the Reds in 2018 but his stunning acrobatic goal ultimately proved to be a huge moment in the club’s return to the top table of European football.

*Statistics and match details and context sourced from match report from BBC.

Liverpool fans, just how special was Can’s goal against Watford three years ago today? Was that the moment you felt that the Reds would secure a top four finish in 2017? Comment below with your views!