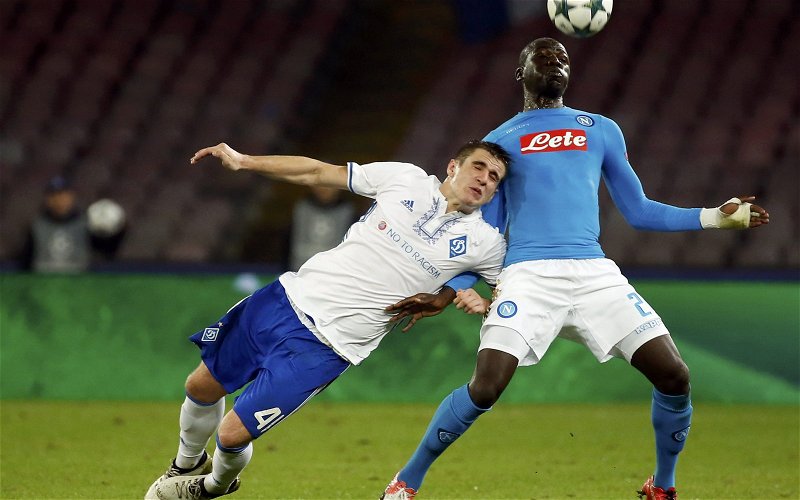 A number of Liverpool fans have not been impressed by transfer reports linking Napoli’s Kalidou Koulibaly with a move to Anfield.

Tuttomercatoweb reported [via Sport Witness] that the Reds have made contact with the Serie A club about a possible move for the 28-year-old, with Napoli chairman Aurelio De Laurentiis prepared to sell the centre-back to raise funds if they miss out on Champions League qualification. The transfer story was later shared on Twitter by @AnfieldEdition.

According to Tuttomercatoweb, Koulibaly had been valued at €100m (£87.38m) by his current club but that figure has dropped because of declining market conditions arising from the coronavirus pandemic.

Liverpool have targeted Napoli centre-back Kalidou Koulibaly and have already held “first contacts” with the Serie A side over his signature.

The 28-year-old is keen on a move and Napoli may have to shift him due to his wages if they fail to qualify for the CL. [TuttoMercatoWeb] pic.twitter.com/NtzhO6Wlqf

The Senegal international has accumulated 233 appearances for Napoli and boasts a formidable tackling success average of 2.6 per game this season. He has twice helped the Italian club to victories over Liverpool, with clean sheets in both of those wins (as per TransferMarkt).

However, with the Reds boasting the best defence in the Premier League thanks to the contributions of first choice centre-back partnership Virgil van Dijk and Joe Gomez, these Liverpool fans on Twitter think the club should divert their attention away from Koulibaly in the transfer window:

Dont want or need him. Need another option in one of the front three positions and being greedy would like two. Werner being first and a Sancho/Traore as a bonus. Elite team should have 6 players for 3 positions.

Or….. How about signing someone we need? Joe Gomez is 22 and already a beast why would we spent so much for a 28 years old defender we don’t really need. We need an attacking midfielder, a back up LB and Werner

What happens to Gomez

Nope …we have Joe . We are sorted

Lol don’t need him. Matip/ Gomez are more than enough to partner VVD. Just sell Lovren and get a young high potential CB we can develop!

Would you like to see Koulibaly at Liverpool or is there a need for him at Anfield? Comment below with your views!