Liverpool 3-1 Arsenal – Things we took from the 90 minutes 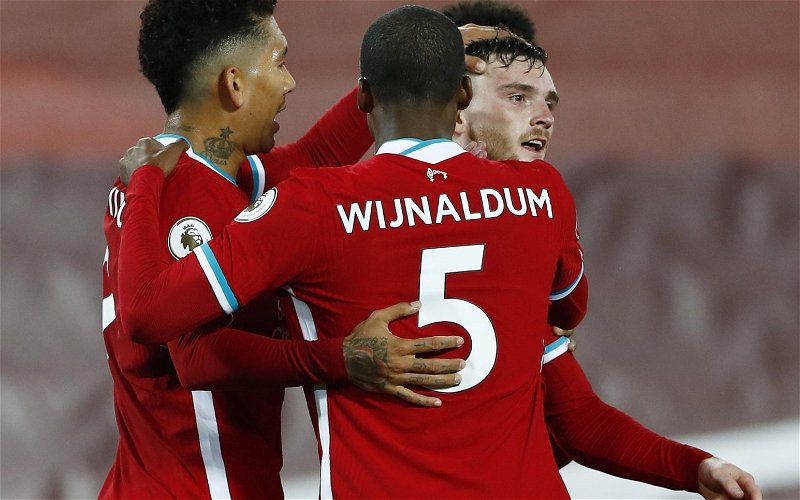 It turned out to be quite comfortable in the end for the champions. But before kick-off, I had concerns about what Arsenal would bring to the table. The last two meetings before this one brought this on. But we got over the line eventually and we learned so much from this game.

There were plenty of positives, but also a few negatives that we also need to bear in mind for the rest of the season. So here goes.

During the early stages of the first half, I had concerns about Georginio Wijnaldum and Naby Keita playing together. On occasions, there looked to be a lack of communication between the two of them and they both bombed forward, leaving us exposed to possible counter-attacks from the visitors.

Although we weren’t behind for long, defensive errors are becoming far too frequent for my liking and I’m sure that Jurgen Klopp will be looking at that. We look uncomfortable being pressed high and it’s yet another mistake that we’ve made against Arsenal.

Andy Robertson was the man who made the error but he proved what an incredibly positive and strong mindset that he has. The Scotland captain was not willing to rest on his mistake and bust a gut to give us the lead before half-time, which hugely impressed me.

During the second half, it was more of the same. Credit to Arsenal, who were tough to break down and they encouraged us to work hard. Both Sadio Mane and Mohamed Salah were everywhere around the pitch, working solidly throughout.

We did create a lot of chances in the second half, mainly down the right-hand side. Both Trent-Alexander-Arnold and Salah linked up superbly to do just that. At times, the Gunners struggled to get to grips with us.

It was great to see Diogo Jota coming off the bench. He got himself into the game quickly and scored after just eight minutes of him being on the pitch. On another day, the Portuguese winger could have had a hat-trick to his name. Weight will have almost certainly been lifted from his shoulders.

So after all of that, here are some of the stand out performances that deserve credit from that game.

For me, Mane was outstanding for us once again. Not only did his goal come at a critical time during the game, but he ran his socks off for us all night long. Even from the off, he looked like he was bang up for it, picking up a booking after just three minutes in what some would describe as being too eager.

what football is on tv today?

Get the latest guide to what Liverpool or other Premier League match is on television via the Live football on tv guide. As well as fixtures and live stream options on where to watch you can also open a legal stream right there with broadcasters such as Sky Sports, BT Sports, Amazon Prime and YouTube.

The Senegal international looks like he is getting better and better as each season passes, which proves how much of a bargain he was from Southampton back in 2016.

Klopp has turned him into an attacking monster. More of the same please, Sadio.

Once again, and as we’ve seen so many times before, our Scouse right-back putting in a superb performance out wide for us. Some of his range of passing made my jaw hit the floor. It’s such an impressive part of the game and I keep pinching myself that this lad is only 21 years old.

The Englishman was always making himself available for the short ball, looked hungry and eager to get us moving on another attack. His set-pieces weren’t too bad either.

For the third season running, we could be seeing another masterclass from Alexander-Arnold, with plenty more games to come to showcase his astonishing talent.