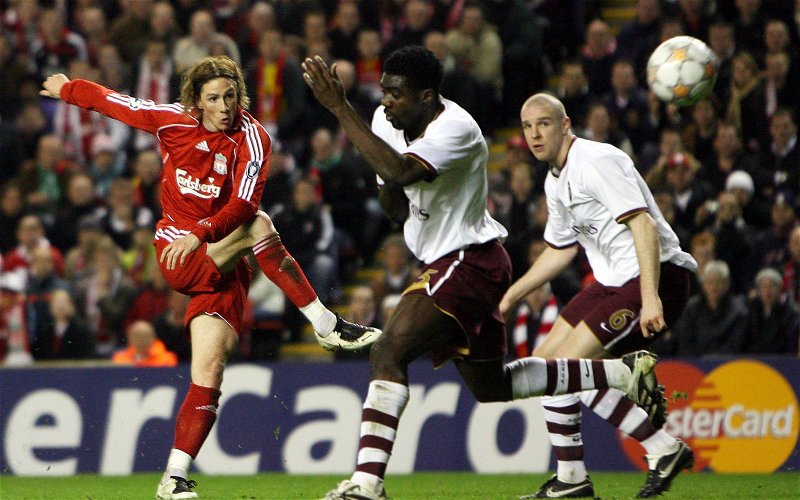 As Liverpool fans, we all enjoy looking back on matches that have made our jaws slam against the floor over the years, especially on famous European nights.

Barcelona comes to my mind when I think of our greatest ever European nights. Chelsea in 2005 is a close second, but people seem to forget about this one.

The year is 2008, the days where the “best midfield in the world” chant was a Kop favourite. A midfield trio of Steven Gerrard, Xabi Alonso and Javier Mascherano lined up against an Arsenal wearing a strange white and maroon kit that could be mistaken as a Tottenham shirt, their arch-rivals.

A crowd of 41,985 were treated to a joyous night of football, even the travelling Gunners’ fans who left the stadium disappointed, but proud of their side’s showing.

It was end-to-end stuff from the off. As I’m writing this, I am listening to Clive Tyldesley’s famous words on this match in my head. Abou Diaby gave the visitors the lead at the Kop end after just 13 minutes. Even at that point, it looked like we were going to have to work hard to get over the line.

Sami Hyypia then leaps above everyone to snatch an equaliser after half an hour. Anfield erupted into a wall of noise. The typical response on a European night under the lights.

Everyone was on edge at half-time. Nobody could have predicted what was to happen in what was an explosive second-half. Don’t forget. It finished 1-1 after the first leg so we had the away goal in our favour.

The Kop was bouncing after Fernando Torres collected the ball from Peter Crouch, turned Kolo Toure and fired into the top corner. The things I would do to see a prime Torres in a Liverpool shirt again.

The Spaniard looked to have won it for us, but Arsenal had different ideas. Theo Walcott ran the length of the pitch and set up Adebayor to make it 2-2 and give the visitors the lead on away goals. I was stunned and so was everybody else. It looked like the Englishman’s moment of magic had decided it.

But we went straight down the other end with Ryan Babel who got in a tangle with Toure and won a penalty. Steven Gerrard made no mistake and fired home to revitalise the fans.

Arsene Wenger’s side threw men forward in the dying moments. Liverpool defended deep. Boos and jeers were echoing around the ground, urging referee Peter Frojdfeldt to blow the final whistle. But Ryan Babel latched onto a clearance and slotted past Manuel Almunia to send us through to the semi-finals of the Champions League.

An incredible night at Anfield. One that some tend to forget when we reflect on great nights on our hallowed turf. Let’s hope for more when Mikel Arteta’s side come to town tonight.