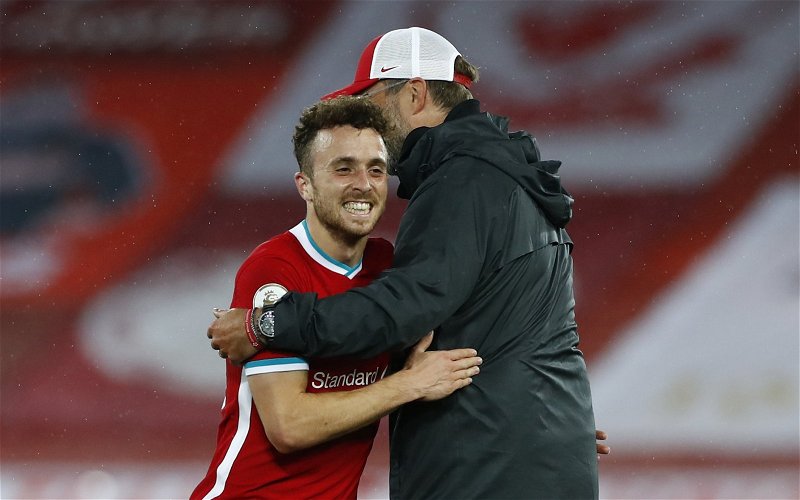 Liverpool have done some fantastic business in the transfer market this summer, and former Reds’ striker Emile Heskey believes one of those signings will help our squad out greatly.

Diogo Jota came off the bench in place of Sadio Mane on Monday and scored the goal that eventually killed the game as we triumphed 3-1 over Mikel Arteta’s Arsenal, in what was a fantastic performance from start to finish.

There were talks of Watford’s Ismaila Sarr coming in having been heavily linked with him all summer but Jota was the man that was preferred by Jurgen Klopp and sporting director Michael Edwards.

Following his £41m move from Wolves a few weeks ago, the Portuguese winger has had a superb start to life at Anfield and Emile Heskey believes that he can be a huge help to the likes of Sadio Mane throughout the season.

“I think so. I think this is where Jürgen has done really well with adding to the squad and adding key players and decent players into the squad, Heskey told Rousing the Kop.

The 60-goal talent raises a good point here. By all means, increasing the squad’s strength in depth is never a bad thing, providing the player possess the sufficient quality required to compete.

Klopp does deserve credit but at the same time, Jota is the one that put in the work and has earned the praise too.

But of course, he has a long way to go and a lot to prove, as I’m sure he will continue to try and force his way into the conversation as one of Klopp’s starting eleven.

Jota has a tough task as he has arguably one of the best left-sided wingers in world football to contend with, and Mane will not be letting up having scored 84 goals and has just moved into our all-time top 20 goalscorers. But with a fixture pileup potentially on the horizon for us, Klopp will need all of the players that he can utilise which will give Jota the opportunity to impress.