Gabby Agbonlahor accuses of Virgil van Dijk of being “arrogant” 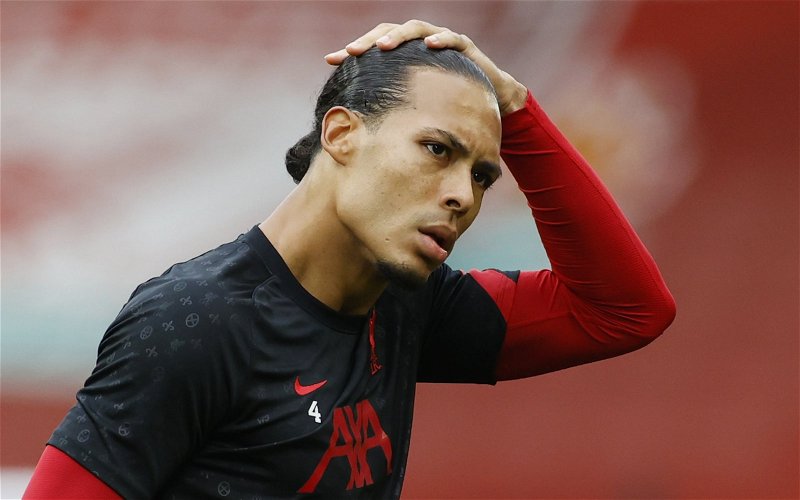 Virgil van Dijk have received a lot of criticism after his latest mistake against Leeds, which has attracted more comments from ex-players.

Despite conceding three goals, we got off to the perfect start and got out of jail thanks to Mohamed Salah’s hat-trick, which took him to three goals short of his century and level with Kevin Keegan’s tally.

The Dutchman made a huge error which saw Leeds’ Patrick Bamford latch onto the loose ball and finished calmly past the helpless Alisson. This is not the first error that the colossus defender has made. More recently, his lapse in concentration helped Arsenal score during our 2-1 defeat against them, having already sealed the title a few games earlier.

Following this, former Aston Villa striker Gabby Agbonlahor believes that his ‘arrogance’ could be getting the better of him, despite having huge respect for the 29-year-old.

“Everyone knows Virgil van Dijk is an unbelievable defender,” he told talkSPORT. “On the ball, he can switch the diagonals, and defensively no one wants to come up against him.

“But I felt yesterday’s performance was, from Van Dijk, arrogant; that flick he made in the goal he gave away, it felt like ‘we are playing Leeds United, it’s going to be an easy game and I can let my standards drop’.

“And in that game, he did [let his standards drop]. Even Trent Alexander-Arnold on the right was poor defensively as well.

“Van Dijk is a great defender, and he will be one of the greatest defenders to ever play the game, but when people start putting him in the Vincent Kompany and Rio Ferdinand bracket. I think people forget how good certain players were as time goes by.”

I think the term arrogant is jumping to conclusions too quickly and overly critical of a man that has already done so much for this club in a short space of time.

Plan your football menu with this great guide to what match is on television via the liverpool on tv page. You can also see what legal streams are available in the UK including streaming options. As well as live tv fixtures there is all the info on where to watch football from broadcasters such as Sky Sports, BT Sport, Amazon Prime, BBC Sport and more.

Jamie Carragher made similar comments about the Holland international during the live coverage of the game, which I believe were harsh.

Complacent, yes. Arrogant, no. For me, it was just a lapse in concentration which can happen to any player, regardless of their ability or the name of the player.

A player of his calibre is allowed to make mistakes every now and again, which is what he has done. But if he is consistently doing them week after week, then that is the time to be worried.

So for now, let’s draw a line under it and give him the benefit of the doubt.