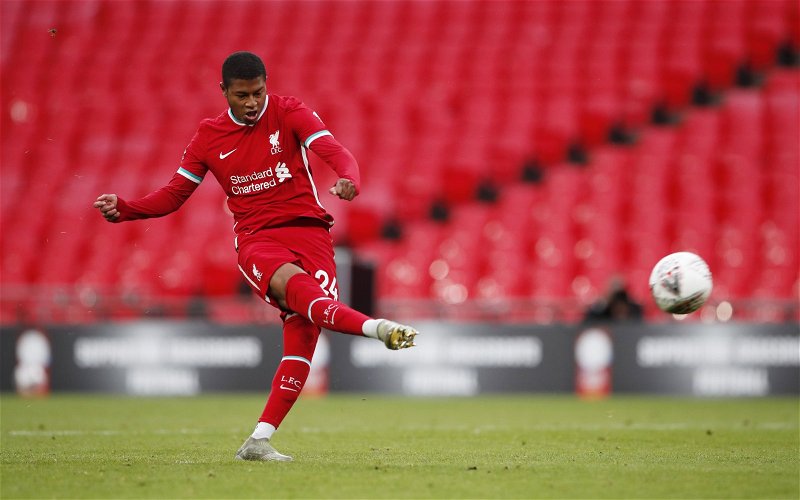 It has been an interesting transfer window for Liverpool. What was initially concerning times turned to sheer delight, and it might not be over just yet.

Rhian Brewster has been heavily linked with the exit door at Anfield recently as his future remains unclear with us, it is unknown as to who is truly behind his reasons to leave. Former academy player Bobby Duncan left in controversial circumstances and I hope this will not turn out in a similar fashion.

Obviously, both scenarios are worlds apart. But there is always that danger attached to these situations that can turn sticky quickly. So it is important that we put our club first and prioritise our future.

Crystal Palace and Sheffield United are both in for Brewster with a £20m fee believed to be his asking price from us. Whether either of those opt to pay that fee, is another question.

Speaking to Football Insider, former Premier League striker Noel Whelan believes that Liverpool are being wise by inserting a possible buy-out as he feels he will make a return to the club in the future.

“There are a lot of teams interested in Brewster.

“A fee of around £20million, in this day and age, for a striker that has proven that he can score goals in the Championship is not too bad.

“Brewster scores all kinds of goals. He has lots of pace, lots of creativity and knows where the back of the net is.

“Brewster would be a fantastic option for Chris Wilder to have. “Liverpool will want a buy-back option and they would be clever to do so. You can be willing to let a talented young player go but if they do develop into a top-class player you want to have that buy-back option. That way you cannot be held to ransom.

Whelan added that any clause added would be a clever move for us, and that we could still re-sign someone at this stage.

I was against seeing Brewster sold at first. Partly because I believed that he had a bright future with us having performed brilliantly on loan at Swansea City last season.

But having unravelled the details of his possible sale, it would be clever for us to put such clauses in place, in the event that we decide to re-sign him.

Will we bring him back? That would be guessing at this stage. It wouldn’t be nice to see him leave but I suppose Brewster himself will want to keep playing regularly every week.

Realistically, we can’t offer that to him right now, especially after the arrival of Diogo Jota. So it will be interesting to see how this mini-saga ends up.