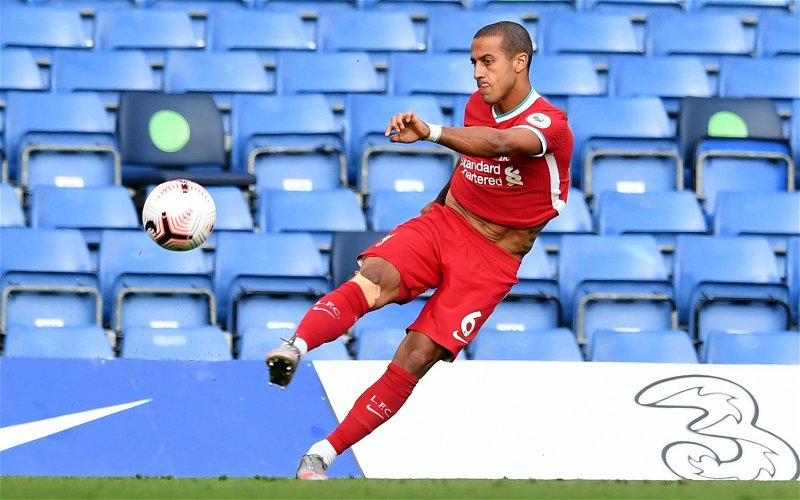 Many have already been written about Thiago Alcantara after just 45 minutes of action in the Premier League, and another former Liverpool player has now expressed his views.

The former Bayern Munich midfielder made the move to Merseyside from Bavaria after eight seasons with the Bundesliga behemoths, winning the league every season he was there and the Champions League in Lisbon which was his final game for the club.

We were all overcome with excitement when Thiago was announced in his £25m deal, but fitness issues prevented him from taking part against Arsenal last night. So we will have to wait a little longer for his first start.

Writing in his Daily Mail column, former Reds’ striker Peter Crouch responds to a question regarding Thiago and the impact that he has had so far during his short time on Merseyside.

“Some new signings come in and you know immediately they are a level up”, he said. “I remember Xherdan Shaqiri scoring a hat-trick on his first day at Stoke, in a five-a-side match, when he completed it by lobbing Jack Butland from five yards. The lads looked at each other and said, ‘Oh my God!’

“There were some similarities I could see in Thiago with Xabi Alonso. It was the way he gathered the ball, how crisply he passed it. Xabi was a wonderful footballer and he came to my mind when I watched Thiago at Stamford Bridge.

“I know he gave a penalty away but did you see those ‘no-look’ passes and how he was rolling the ball under his studs?

“There was so much to admire in those 45 minutes and he is going to be a big figure through the rest of the season.”

This is a compliment of the highest order from Crouch, and it’s difficult to disagree with him. We all want to see more of what we saw against Chelsea on Sunday and after last night’s game, we have a good idea as to what direction we are heading in this season.

Thiago is a top talent, and so was Xabi Alonso. I mean, imagine those two in our midfield alongside Steven Gerrard in his prime.

That vision has me salivating writing this. Even so, his inclusion in our current midfield makes us a mich better outfit going forward and puts in a better position to retain our title.

Of course, no guarantees come with the price. This isn’t a supermarket bargain we’ve got ourselves here. Thiago has to put the work in and I’m sure, with the quality of his CV, will produce the goods with us at Anfield.