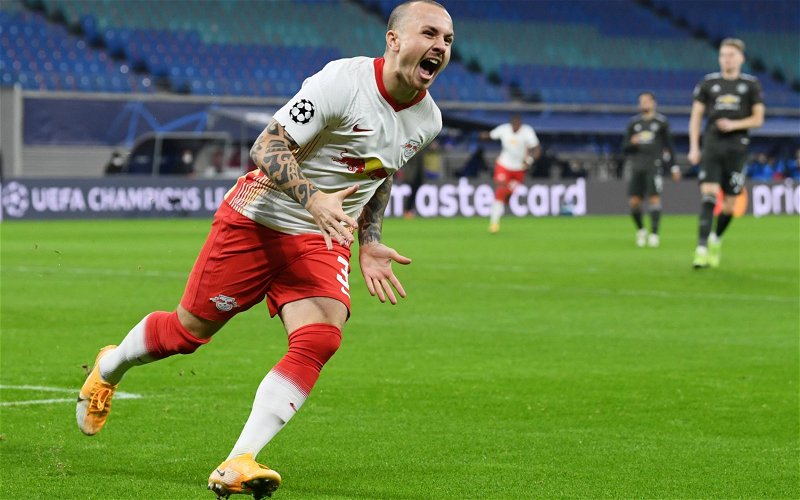 Liverpool have been handed a boost ahead of the UEFA Champions League round of 16 second-leg clash with RB Leipzig as Angelino was ruled out.

According to Sports reporter for PA Carl Markham on Twitter, the full-back has been ruled out by Leipzig manager Julian Naglesman, who has confirmed he won’t play again until after the upcoming international break.

The Reds are in relative control of the tie, having secured a 2-0 victory with goals from Mohamed Salah and Sadio Mane on neutral ground for the away leg a fortnight ago.

On Wednesday evening Jurgen Klopp’s side will walk out at the Puskas Arena, Budapest once again, looking to qualify for the quarter-finals and enjoy some respite from what has been a diabolical Premier League run.

The full-back, who remarkably tops the Leipzig scoring charts having contributed seven goals and seven assists this season, had been vocal in the build-up to the match, questioning the defensive acumen of Liverpool star Trent Alexander-Arnold.

Given the impact the full-back has made since linking up with the German side, this will come as a timely boost for the Reds.

Angelino’s absence will offer further relief for Alexander-Arnold, who was certainly kept occupied in the first leg by the marauding Spaniard.

The left-sided defender at times played more like a left-winger and perhaps posed the greatest threat to Liverpool’s clean sheet as his efforts ultimately flew wide when afforded plenty of space.

Having initially joined the Bundesliga side on-loan from Manchester City, the 24-year-old has since earned a permanent switch having enjoyed a fruitful time in Germany.