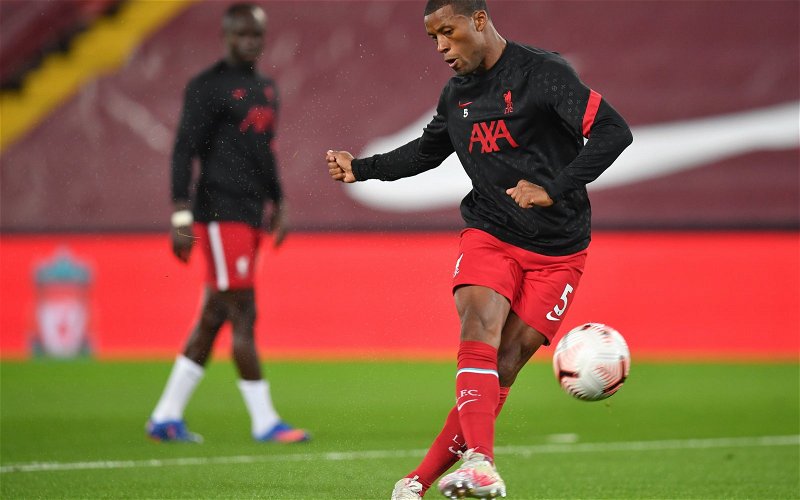 Liverpool losing Gini Wijnaldum this summer will be a “huge blow”, according to former Everton striker Kevin Campbell.

The Dutchman’s future at Anfield still looks up in the air, but he is yet to sign a new deal and his current contract expires at the end of the season.

Wijnaldum has been continually linked with a summer move to Barcelona, with the 30-year-old potentially linking up with compatriot Ronald Koeman at the Nou Camp.

Speaking to Football Insider, Campbell claimed Liverpool will only truly miss the midfielder when he leaves, should he end up moving to pastures new:

He’s always fit. Sometimes he’s underappreciated. A lot of these underappreciated guys, they don’t say much. They just get on with their jobs but they’re like a glue and they bring things together.

You’ll notice just how good he was when he’s gone. He’s gonna be a hard act to follow because he’s fit every week. For a manager to have that, a player who he can trust every week is great.

It’s gonna be a blow for Liverpool. It won’t be the end of the world but it will be a huge blow because he’s one of their most consistent performers.

The ideal scenario would be for Wijnaldum to stay put, considering what a consistent performer he has been for the Reds over the past five seasons.

Campbell is spot on in saying he will be only be fully appreciated when he is no longer in Liverpool’s midfield, with his physicality, ball retention – 92.2 percent pass completion rate in the Premier League this season – and intelligence making him so influential.

Not only that, but Wijnaldum’s injury record has also been exemplary, with him such a reliable presence for Jurgen Klopp. A total of 224 Reds appearances in less than five years is testament to that.

It looks likely that he may leave, but if he does, he should be remembered as a Liverpool legend, having won both the Champions League and Premier League, playing a major role in those successes.