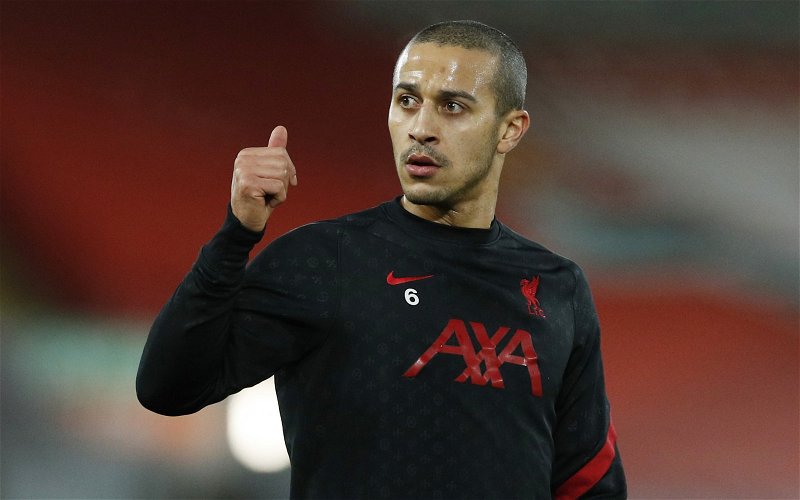 Barcelona are interested in signing Liverpool midfielder Thiago Alcantara according to a report from Spanish outlet El Gol Digital.

The Spaniard hasn’t made the start to life many might’ve envisaged since completing his £25m switch from Bayern Munich last October.

Despite enjoying a promising beginning to his fledgeling Anfield career, Thiago has struggled to find his best form since returning from a knee injury in January.

Now, this report from the midfielders homeland has claimed Barca are keen to bring the 29-year-old back to the Nou Camp where his career began.

Contracted with Liverpool until 2024, there has been no suggestion the Reds would entertain cutting short his stay.

Thiago, who was dubbed a ‘coaches dream’ by former Bayern boss Niko Kovac, has so far made 17 appearances for the club, without registering a single goal or assist in that time.

Whilst there’s no doubt Thiago hasn’t lived up to expectations thus far, exceptions have to be in place given the turmoil he has experienced and around him.

Having suffered from a long-term injury lay off and illness, the Spanish international has returned to a side bereft of confidence and star names.

The reality is, few midfielders in world football can hold a candle to Thiago at his best and the creative ace has a trophy-cabinet that most successful football clubs would be proud of.

Liverpool fans are best served to reserve judgement until next season, whilst interest from Barcelona should simply be rebuffed from the outset.