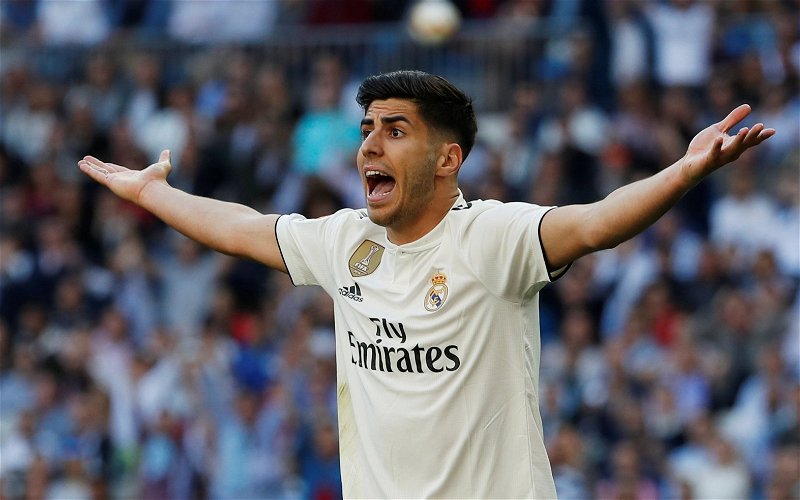 Liverpool are interested in signing Marco Asensio from Real Madrid this summer, according to a report from Spanish news outlet El Gol Digital.

The report claims scouts for the Reds see the Spaniard as a Mohamed Salah ‘clone’ and could act to sign the 25-year-old for €40 million (£34.45 million).

French powerhouse Paris Saint-Germain are also said to be interested in the former Espanyol man and could present major competition to Liverpool’s chances.

Prior to an injury-hit 2019/20 campaign Asensio had been a regular for Los Blancos but has struggled to force his way back into Zinedine Zidane’s plans since returning to fitness.

That said the 26-cap Spain international has appeared on 33 occasions this season across all competitions, contributing three goals and two assists in that time.

In 2017 after signing a new six-year contract at the Bernabeu, then teammate Cristiano Ronaldo tipped Asensio to follow in his illustrious footsteps and one day win the prestigious Ballon d’Or crown.

Liverpool will of course be granted a closer look at the two times Champions League winner when the Reds face Madrid in the quarter-finals of the competition.

Whilst Ballon d’Or levels haven’t quite been reached just yet, there is a supremely talented player in Asensio and one Jurgen Klopp would certainly benefit from having at his disposal.

Salah’s arrival was transformative for Liverpool and set the Reds on the way to multiple successes.

This current squad don’t necessarily need a similar impact this summer, just additional strength in depth, something the Spaniard would certainly bring.

The mooted £34.45 million asking price isn’t earth-shattering either and could be raised by selling surplus to requirements squad players.