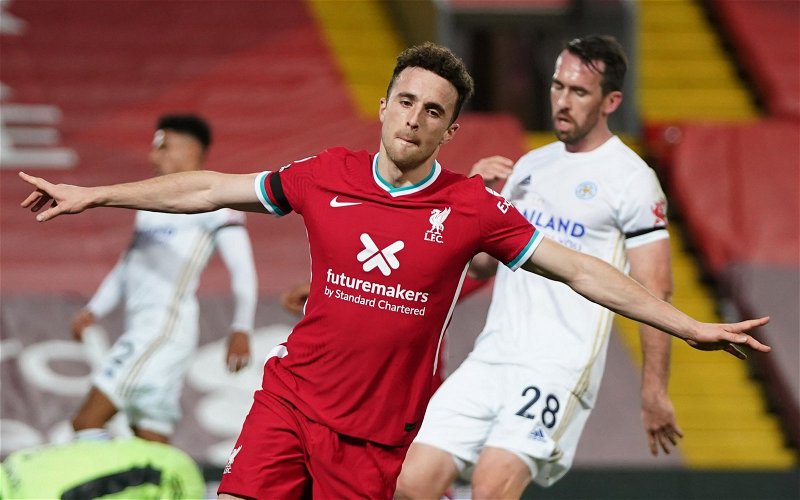 Stephen Warnock has hailed the ‘quite incredible’ performance of Diogo Jota during Liverpool’s Champions League over RB Leipzig.

The Reds qualified for the quarter-finals of the competition as they overcame Leipzig 2-0 on the night, with goals from Mohamed Salah and Sadio Mane to progress with a 4-0 aggregate victory.

Jota was starting his second consecutive match on his eagerly anticipated return from a knee injury suffered in the final group game of the competition.

With Roberto Firmino out with his own knee problem, the Portuguese forward has shone on his comeback and Warnock believes the 24-year-old may have ousted the Brazilian altogether.

He told BBC Sport: ”Diogo Jota brings a penetration to Liverpool – it allows them to run at defences because Roberto Firmino likes to pick the ball up in deeper positions and that hasn’t quite worked for him this season. Jota has the ability to press, and win the ball back straight away when he loses it – his energy levels are quite incredible.”

A former Red of 67 appearances turned pundit, Warnock added: ”I think we will see the changing of the guard in that front three. I think it probably would have happened if Jota didn’t get injured. He has been brought in for that reason but also for rotation to keep them all fit and all in peak condition.”

Jota had made a dazzling start to his fledgeling Anfield career prior to his injury setback, scoring nine times in his first 17 outings for the club.

At this very point last season, Kopites almost universally would’ve been incredulous at the thought of splitting up the famed front three for good.

However, a combination of Jota’s impact and Firmino’s dip in performance, the signs are certainly all there.

That’s not to say Firmino’s days as a Red are over, perhaps more of a squad role or positional alteration will bring the best out of the Brazilian once more.