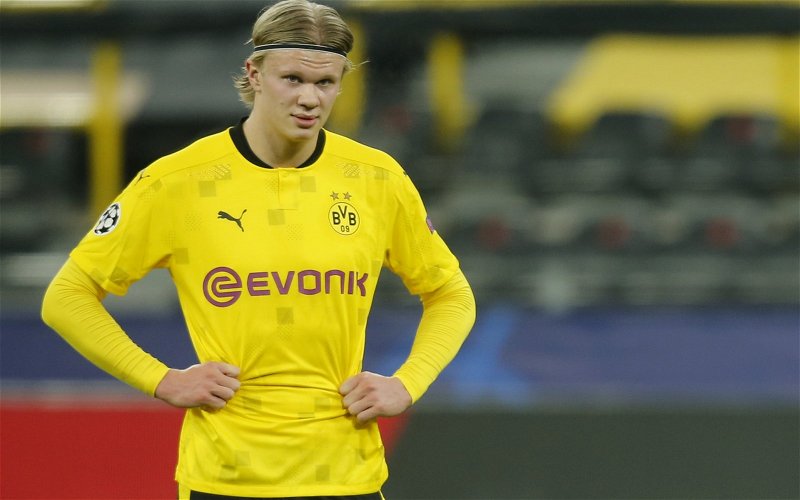 Every elite club worth their salt will be in for the Norwegian phenomenon either this summer or next when an affordable release clause becomes active.

However, Aldridge, a goalscoring hero himself, doesn’t believe the more ‘traditional’ big sides like the Reds or Manchester United will have the financial clout to make a deal happen this year.

“Haaland is the player every club wants this summer. But I suspect the traditional giants of European football will be blown out of the race to sign the hottest talent in football,”

“The Borussia Dortmund striker is the real deal in every sense of the word. If a player of his calibre emerged in the game over the last few decades, he would be destined to go to Real Madrid, Barcelona, Manchester United or Liverpool.

“The financial cost of the last year is biting hard for football clubs at all levels of the game. As such, it might well reset the landscape of the game for years to come.

“Manchester City, Paris Saint-Germain and Chelsea are funded very differently than the game’s established giants. With this in mind, I suspect a new era may be about to dawn.”

Aldridge went on to describe this moment as perhaps the ‘biggest opportunity’ for those clubs to strike, whilst Liverpool and Manchester United are perhaps unable.

Unfortunately, Aldridge could be spot on with this assessment.

This summer will almost certainly come too soon for the Reds in the race to sign a player who looks to be a once in a lifetime talent.

Liverpool’s best hope is that Haaland stays put this summer and Klopp and co can fight on a more even footing next year.