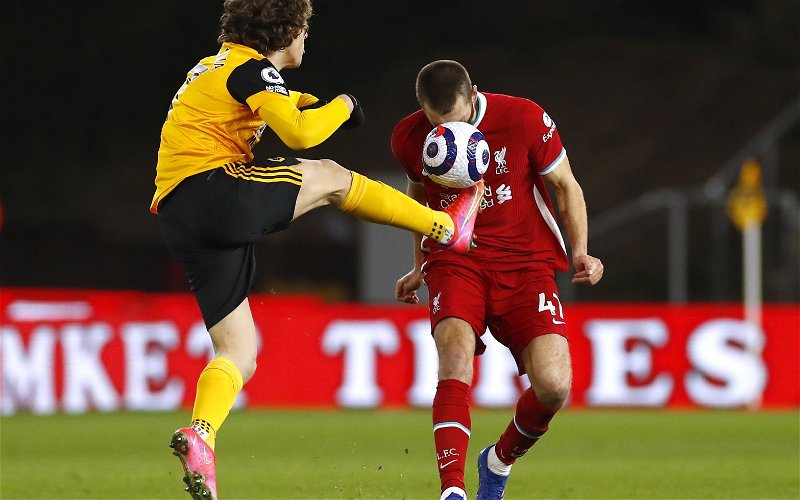 The only goal came from former Wolves man Diogo Jota, as the Reds put themselves back into contention for what had seemed an unlikely top-four finish.

Having kept back to back clean sheets with a 2-0 success over RB Leipzig in the UEFA Champions League previously, Klopp has rather stumbled on what looks like a settled partnership between Phillips and Ozan Kabak.

Following what could be a valuable three points, Klopp was full of praise for what was another impressive display from his new pairing and in particular, Phillips.

“Ozan is 20-years-old, new club and comes here with the only confidence here that we wanted him, all the rest before that was only bad experiences.”

“It was going on here a little bit result-wise. But he stayed on track and gained confidence more and played a really good game.”

“But together with Nat again. Come on. Nat Phillips (chuckles). I am not sure he had his head again everywhere, so it’s just a pleasure to watch him.”

Whilst the duo perform admirably, there’s little doubt the return to his rightful defensive midfield position for Fabinho has helped offer additional protection to the defence.

Klopp has been crying out for a settled partnership all season since injures started to take hold.

Whilst it’s still early days for the partnership to fully blossom, the early signs are positive that they can at least provide a solution for the remainder of the season.

Whether it’s strong enough to achieve what would now be seen as a success for the Reds is another question, but stability at the back is certainly no bad thing.

Prior to this run, it could be argued both men had uncertain Anfield futures, although they are putting that uncertainty to bed right now.