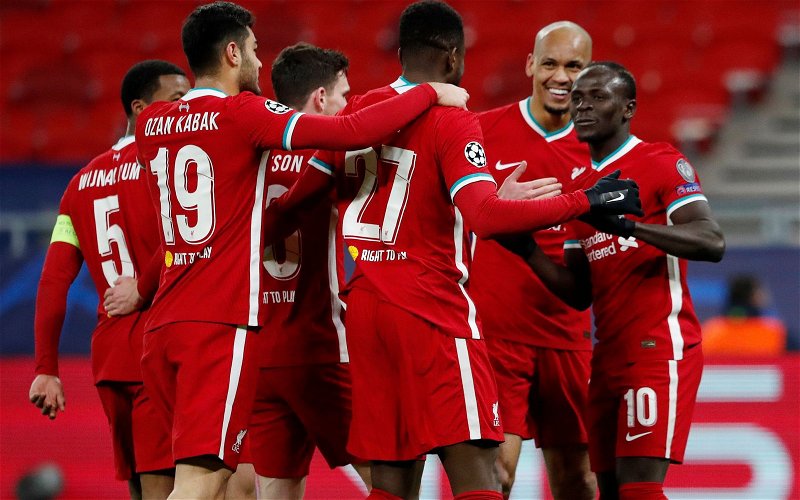 Liverpool continued their UEFA Champions League campaign with a 2-0 victory over RB Leipzig in the second leg of their Round of 16 clash.

In a repeat of the first leg, goals from Mohamed Salah and Sadio Mane came in the second half to give the Reds what ultimately proved to be a comfortable 4-0 aggregate success.

Liverpool were wasteful in the first half and squandered numerous chances to put the game to bed long before they managed to.

The pick of the chances throughout the early stages fell to a lively Diogo Jota, who somehow ended his evening without finding himself on the scoresheet.

That matters not to Jurgen Klopp’s side, who will await next weeks quarter-final draw to see who they will face against next when the competition returns in April.

Alisson Becker – 7 – Significant save in the first half to keep the score at 0-0. Quiet second half when he may have expected an onslaught.

Trent Alexander-Arnold – 7 – Opted for the pullback when a shot might’ve been the better bet in the first half. Range of passing caused issues to Leipzig all night.

Ozan Kabak – 6 – Agressive in the tackle and showed a wider array of passing. Comfortably his best performance since signing on loan for the season.

Nat Phillips – 9 – Relished the aerial battle all night and strong performance overall. Won each and every individual battle and has earned his place in this side.

Andy Robertson – 7 – Afforded plenty of space in an attacking sense and defended well when called upon.

Fabinho – 8 – Huge impact back in midfield. Breaking up play on numerous occasions and often found himself in the right place at the right time. Has to stay in midfield moving forwards.

Gini Wijnaldum – 7 – Captain on the night and found himself picking up plenty of good positions and loose balls. Put in a superb shift before being replaced by James Milner.

Thiago – 8 – Much improved performance in a more advanced role. Perhaps could’ve shot early on instead of attempting to feed Salah. An outrageous pass to the Egyptian almost broke the deadlock.

Mohamed Salah – 8 – Fluffed his lines with the goal at his mercy from Thiago’s pass. A threat all night and finally got his goal with a cool finish into the bottom right-hand corner.

Diogo Jota – 7 – Should’ve had at least one in the first half and was denied by a superb save from a superb header. Assisted the opener and added a lively presence.

Divock Origi – 7 – An outstanding ball across the face of goal for Mane’s goal and looked more engaged than normal.

James Milner – NA – Took the captains armband to see the Reds over the line.

Kostas Tsimikas – NA – Late change to give Robertson a rest.

Alex Oxlade-Chamberlain – NA – Late change to give Mane a rest.