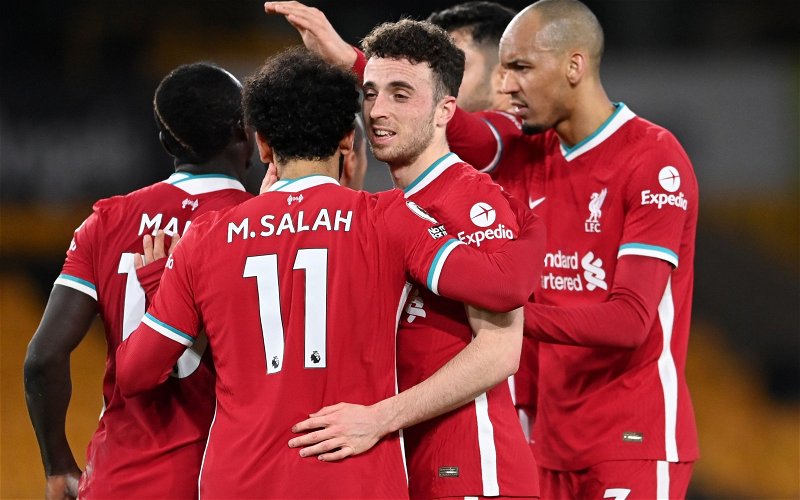 Liverpool battled their way to a hard-fought victory against a resilient Wolves side to put themselves back into contention for a top-four finish.

Despite not creating numerous clear cut chances the Reds found a way to win, a quality that has been lacking lately having been the backbone of the successes last season.

It was a Diogo Jota goal that proved the difference on the stroke of half time as the Portuguese winger fired home against his former side.

There was a sombre end to the evening as Wolves stopper Rui Patricio was stretchered off with a suspected concussion.

Jurgen Klopp‘s men now enjoy a break from the action without a fixture next weekend before the international break.

Here’s how we rated the Reds…

Alisson Becker – 7 – Recovered from a nervy moment early on to see out the first half well. Coped well with everything thrown at him in the second half.

Trent Alexander-Arnold – 8 – In a change from the norm for the England man it was the defensive side of his game that shone here.

Ozan Kabak – 8 – Showed an impressive turn of foot to get back on numerous occasions. Seems to be growing in stature and confidence with each passing game. MOM

Nat Phillips – 7 – Vital header at the back post to deny Willian Jose a glorious chance. Superb late clearance as Liverpool hung on. Another solid night and a clean sheet.

Andy Robertson – 7 – More like his usual marauding self down the left and combined well with Mane throughout. Coped well with Adama Traore.

Fabinho – 7 – Offers superb protection to the backline. A little sloppy in possession and passing left a lot to be desired.

Thiago – 7 – Eventually booked after numerous fouls. Not his best night but moments of quality slotted in. Replaced.

Gini Wijnaldum – 6 – First half passed him by somewhat and despite his tireless energy to always provide an option, the quality lacked. Replaced.

Mohamed Salah – 7 – Goal disallowed for offside and played a hand in the goal. Missed a glorious chance to put the icing on the cake late on. Dangerous as ever.

Diogo Jota – 8 – Opened the scoring against his former employers with a low left-footed strike at the end of the first half. Lively before being replaced.

Sadio Mane – 7 – Missed a huge chance to give Liverpool the lead and perhaps could’ve gone down. Went close with a header before assisting the opener.

Naby Keita – 7 – Forward-thinking as ever in another promising performance on a return to fitness.

James Milner – 6 – Brought of to sure things up in midfield and did just that.

Alex Oxlade-Chamberlain – 6 – Bright cameo role and unlucky not to earn an assist to Salah for the disallowed goal.