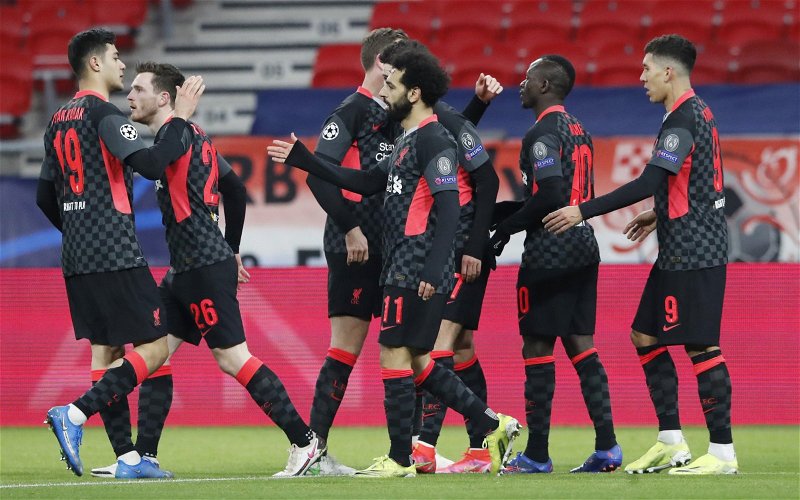 Liverpool will be out to avoid another blow to their stuttering season as they face RB Leipzig in the UEFA Champions League Round of 16 second leg, holding a 2-0 advantage from the first clash.

Due to travel restrictions in Germany, the Reds will play hosts at the Puskas Arena in Budapest, the same venue as the first leg when goals from Mohamed Salah and Sadio Mane goals put Jurgen Klopp’s side in command of the tie.

Playing away from Anfield will likely be a blessing in disguise for a Liverpool side currently suffering a crisis of confidence at home.

Despite welcoming back Diogo Jota, Fabinho and Naby Keita in recent days, it hasn’t all been plane sailing on the injury front in the build-up, as Roberto Firmino is expected to miss the Leipzig encounter with a knee problem.

GK – Alisson Becker – Seems to have recovered from a shaky fortnight recently and has been back to near his best keeping Liverpool in matches of late.

RB – Trent Alexander-Arnold – Rested on Sunday before entering the fray for the last 15 minutes. Could face an easier night with Angelino expected to miss out.

CB – Ozan Kabak – Missed the defeat to Fulham but expected to return her having trained this week. Big night in the Turkish defenders fledging Liverpool career.

CB – Nat Phillips – Has proven he is capable defensively, although he does have his limitations.

LB – Andy Robertson – Barely missed a single minute across all competitions and another huge part to play here.

CDM – Fabinho – Has deputized superbly at centre-back but the time has come to play the Brazilian in his strongest position. Can offer adequate protection to the defence whilst winning the ball back higher, allowing Thiago to flourish.

CM – Thiago – Hasn’t shown his best form in a Liverpool shirt yet but more than capable of taking control of matches like this at the business end of competitions.

CM – Gini Wijnaldum – Like Robertson, has barely missed a kick this season and his energy and endeavour will be important here.

RW – Mohamed Salah – Opened the scoring in the first leg and continues to score goals despite the side’s struggles. Will be another who is thankful Angelino misses out.

LW – Sadio Mane – Miles away from his best form in recent weeks and things haven’t clicked in front of goal since doubling the Liverpool lead in this stadium.

CF – Diogo Jota – Perhaps would’ve started even without Firmino’s injury. Won’t hold his position centrally as the front three will be more fluid than ever, potentially adding a new dimension.