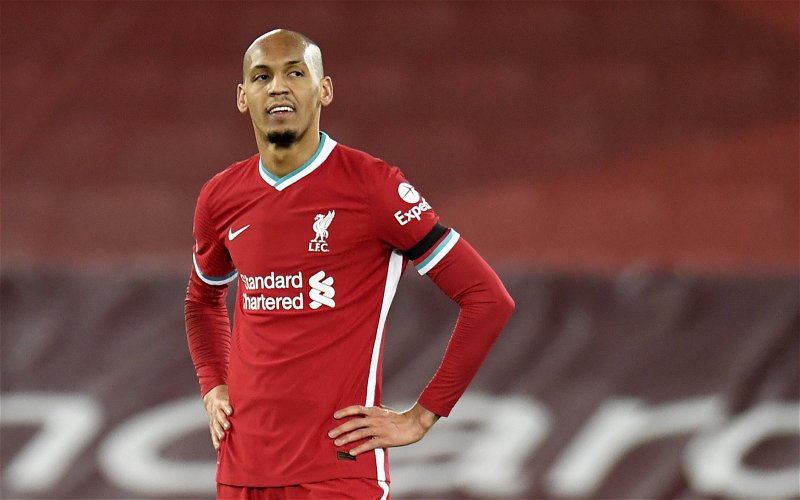 Liverpool assistant manager Pep Lijnders has admitted the decision to move Fabinho into the centre of defence might’ve cost the Reds their title challenge this season.

The 12-cap Brazil international was the emergency centre-back when Virgil van Dijk was ruled out for the season, not returning to his favoured defensive midfield position until the Champions League last-16 second leg against RB Leipzig – a massive 22 games later.

Fabinho performed admirably in defence but his absence was hard felt in midfield, leading to questions over the wai for his return, particularly following the signing of Ben Davies and Ozan Kabak on deadline day.

Since returning to his favoured role, Jurgen Klopp’s side have won back to back matches without conceding in the process – leading to Lijnders perhaps admitting an error was made when speaking to the club’s official website.

‘We didn’t lose only our last line (due to injuries to Van Dijk, Joe Gomez and Joel Matip); by losing our last line we lost our midfield as well.

‘And that’s where we lost our engine, and that’s a big problem. It’s something that created doubt in many different tactical aspects.

‘We always tried to find the solution, but the solution needs consistency, and that was the problem because there were always different and new problems coming and took the consistency away.

‘He (Fabinho) has the capacity to make the players around him better. It’s really difficult to find players who have the talent to make the other ones flourish.’

Klopp’s right-hand man went on to hail the influence of Gini Wijnaldum and Jordan Henderson as holding similar importance.

Everyone has a degree in hindsight and having watched Fabinho perform so impressively at centre-back, it’s easy to understand why the 27-year-old spent so long there.

With each passing defeat, it began to look as though his midfield presence was too big a miss, as has proven the case thus far.

Credit should also go to Kabak and Nat Phillips who have perhaps enhanced the complexion of Fabinho’s return with their performances as a defensive duo.