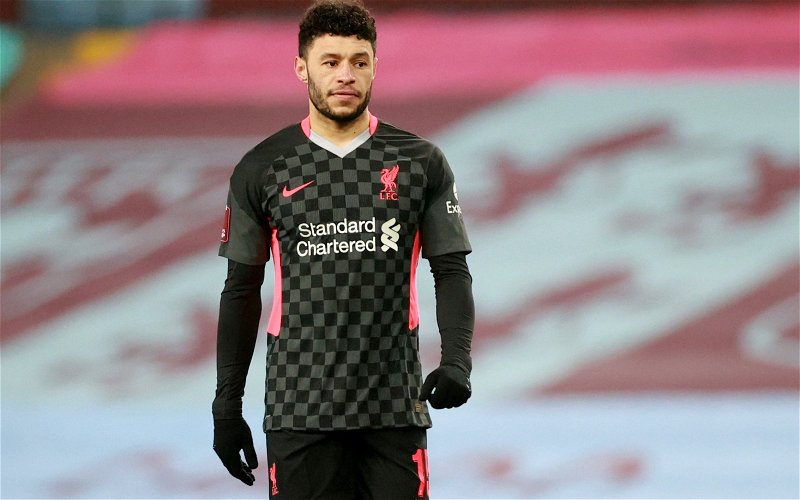 Liverpool should perform a U-turn on their reported summer plans to part company with Alex Oxlade-Chamberlain.

That’s according to former Premier League goalkeeper Paul Robinson, who has told Football Insider that the Reds would be making a mistake by allowing the England man to leave at the end of the season.

This follows a report from the Sunday World claiming the 27-year-old is one of four men who could leave Anfield in the near future.

Robinson. however, doesn’t believe that time has come:

“I really rate him, I think he is a very talented player. He had a real impact at Liverpool when he first came in.

“You have got to remember that Wijnaldum is likely to leave, Henderson and Milner are another year older, Thiago is not at his best and Keita cannot put a run of games together.

“If they let Oxlade-Chamberlain go as well you are all of a sudden talking about a huge overhaul of that squad.

“There is an opportunity for Oxlade-Chamberlain to play more if Wijnaldum leaves but he has not been used despite all of the injuries they have suffered this season. I would have expected him to play more.”

Since arriving from Arsenal in 2017, Oxlade-Chamberlain has enjoyed fleeting moments of success with the Reds, albeit too often they have been tempered by injury setbacks.

This season the 35-cap England ace has played just 257 minutes across all competitions.

Whenever it comes to its conclusion, Oxlade-Chamberlain’s Liverpool career will always be looked back on fondly, albeit slightly bittersweet.

Filled with promise and some high-quality moments, horrendous luck with injuries looks set to be the overriding feature.