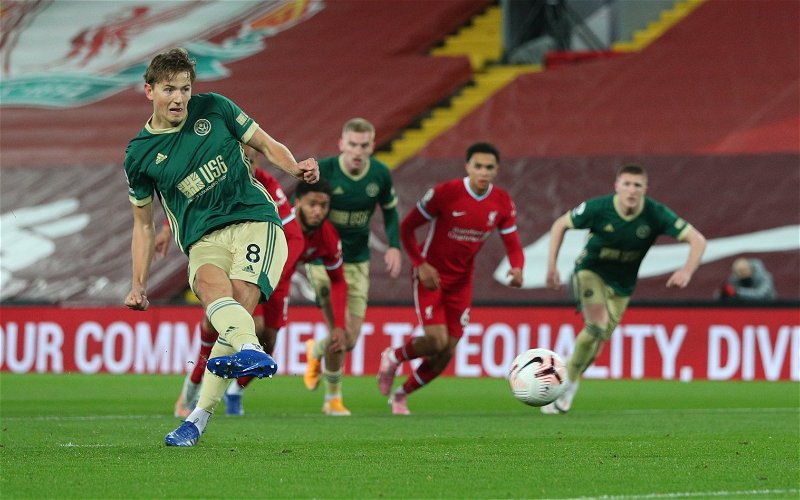 Liverpool are interested in signing Sander Berge from Sheffield United at the end of the season, according to a report from Eurosport.

Fellow Premier League side Aston Villa have also been credited with an interest in the 23-year-old, who is currently out with a long-term hamstring injury.

Berge was signed for a then club-record £22million (BBC) by the side rooted firmly to the bottom of the Premier League in January 2020.

Now, the Reds are believed to be eyeing up the Norwegian ace as Jurgen Klopp starts to prepare for life after Gini Wijnaldum, who is still yet to decide on where his future lies beyond this campaign.

Prior to picking up a season-ending injury, Berge had been performing relatively admirably for the Blades, averaging 6.75 a match and completing 86 per cent of all passes successfully (Sofascore).

Reds will remember Berge as the man who controversially opened the scoring at Anfield from the penalty spot, before Klopp’s side turned the match around to prevail 2-1.

This proposition is made all the more intriguing as back in 2019 when the Norway ace was plying his trade for Belgian side Genk, Liverpool boss Klopp is quoted as describing the defensive midfielder as a ‘very interesting player’.

With Sheffield United doomed to go down, there’s certainly proven previous when it comes to signing players from relegated sides, with Andy Robertson and Wijnaldum himself arriving from recently-relegated clubs.

Berge would present another very shrewd signing, who on his best form would certainly be worthy of remaining a Premier League player.

Powerful, strong in the air and with room to develop as a player, this is a signing that makes plenty of sense regardless of what transpires with the Dutchman.