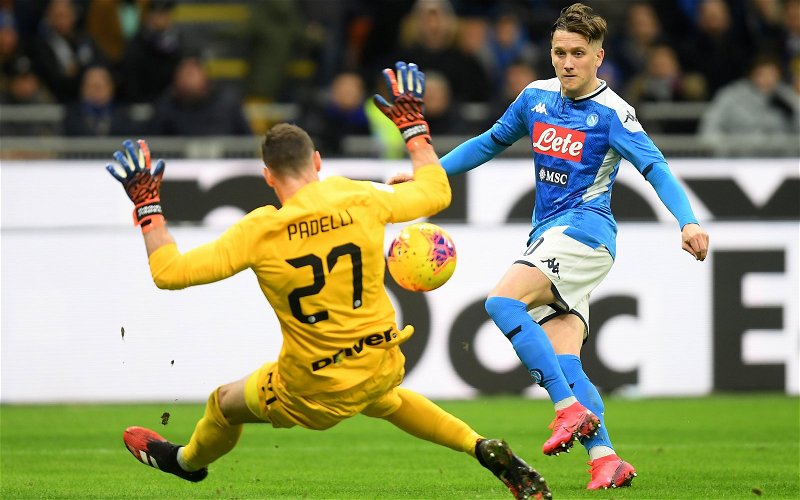 Liverpool are believed to be following Napoli midfielder Piotr Zielinski ‘with great attention’ having come close to signing the Polish international back in 2016.

This comes from Naples based Radio Kiss Kiss as relayed by Area Napoli, who claim that the Reds are once again interested in Zielinski, as are Manchester City and Barcelona.

Liverpool were thought to be on the verge of signing the 26-year-old during his time at Udinese, however, the failure to do so paved the way for the arrival of Gini Wijnalum.

In a bizarre twist of fate, Zielinski could now be in the frame once again, this time to replace Wijnaldum who could leave the club this summer as a free agent.

The report claims whilst the club are currently interested in parting ways with their creative midfielder, offers involving ‘big numbers’ could change their stance.

Zielinski is well known to Jurgen Klopp, having faced Napoli on numerous occasions in recent Champions League campaigns, and the German boss reportedly praised the Pole in person after one meeting in 2019.

This season the 56-cap ace has contributed eight goals and eight assists in 36 appearances across all competitions, earning an average Sofascore rating of 7.18.

Zielinski would be a superb addition to Klopp’s squad and offer much-needed creativity to what has at times been a midfield bereft of ideas.

Valued at £41.4m (Transfermarkt) and with the aforementioned ‘big numbers’ required, the Polish star would likely take up a large amount of the Reds’ budget this summer.