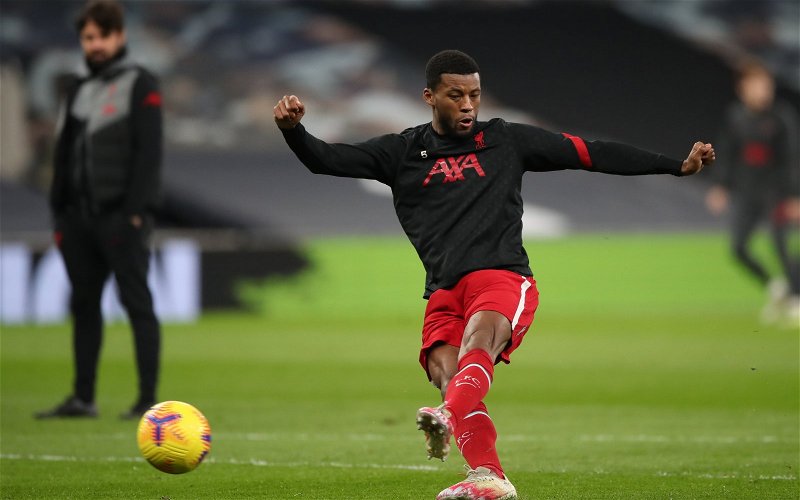 Former England goalkeeper believes it will cost Liverpool ‘tens of millions’ to replace Gini Wijnaldum this summer should the Dutchman leave when his contract expires.

The 30-year-old is no closer to signing a contract extension at Anfield and has been heavily linked with a move to Barcelona.

Robinson told Football Insider that the Reds will have an ‘incredibly hard’ and expensive job on their hands to replace the midfielder.

“When you look at the injuries they have suffered and the upheaval they have had this season, he has been one of the only consistent performers.

“Yes, he has not performed to his very best but he has been fit and available all season.

“It will be incredibly hard to replace him in the summer. Jordan Henderson and James Milner will both be another year older.

“If Wijnaldum leaves Klopp will have to enter the transfer market to find a replacement and that could cost them tens of millions.”

Wijnaldum has been one of the few players not to suffer badly with injury this season in Jurgen Klopp’s squad.

In a season plagued with injury, the Dutchman has played 40 times this season across all competitions.

Signing a midfielder should Wijnaldum leave will no doubt be a priority this summer.

With a squad at full fitness, Klopp has somewhat of an embarrassment of riches in central midfielder, but that’s very rarely the case.

Wijnaldum’s reliability has no doubt been his strongest asset this season – something that will be very difficult to replicate with whoever comes through the door.