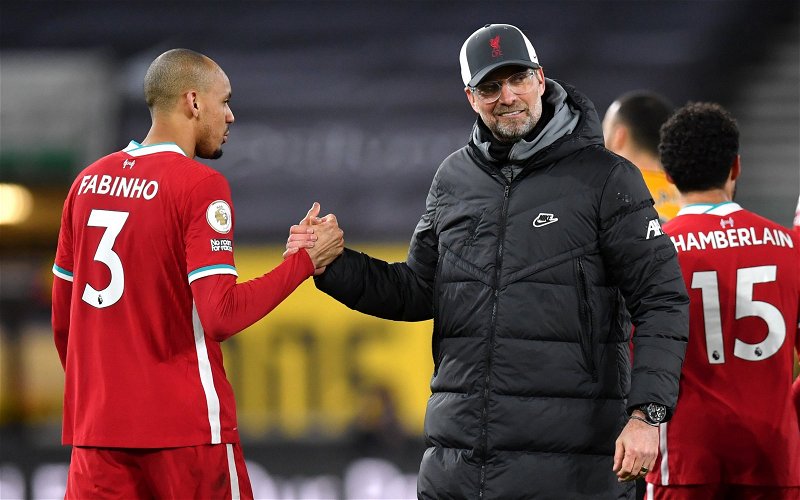 Reputable Italian journalist Fabrizio Romano has revealed that Liverpool are pushing to tie Fabinho down to a new contract at the club in the near future.

Fabinho has recently returned to his favoured defensive midfield positon having deputised at centre-back as an injury crisis took hold.

Having looked accomplished back in midfield and helping the Reds to two consecutive clean sheets, Romano says Jurgen Klopp is ‘in love’ with Fabinho and wants him to be a part of the long-term plan at Anfield.

Speaking on his Here We Go podcast, Romano explained the Brazilian’s situation: “Keep an eye on Fabinho because Liverpool are pushing. They want to make a proposal to Fabinho. They are so, so happy with him. Jurgen Klopp is in love with Fabinho, so they are working to extend his contract and Fabinho’s happy at Liverpool so [there are] positive feelings also from his side.”

Fabinho’s current deal expires in 2023 and the club may be looking to avoid a repeat of the Gini Wijnaldum scenario at all costs.

Liverpool signed Fabinho in the wake of the 2018 UEFA Champions League final defeat to Real Madrid, landing the ace from Monaco for £43.7m (SkySports).

Since then the 27-year-old has played 111 times for the Reds, including 31 in this injury-ravaged campaign.

Fabinho’s importance to this Liverpool side has never been more prominent than this last fortnight.

Having filled in admirably at centre-back, his absence in midfield was plain for all to see and his return and subsequent lift in performance has proved the point.