Jurgen Klopp slams ‘rubbish’ suggestions Thiago has been a problem 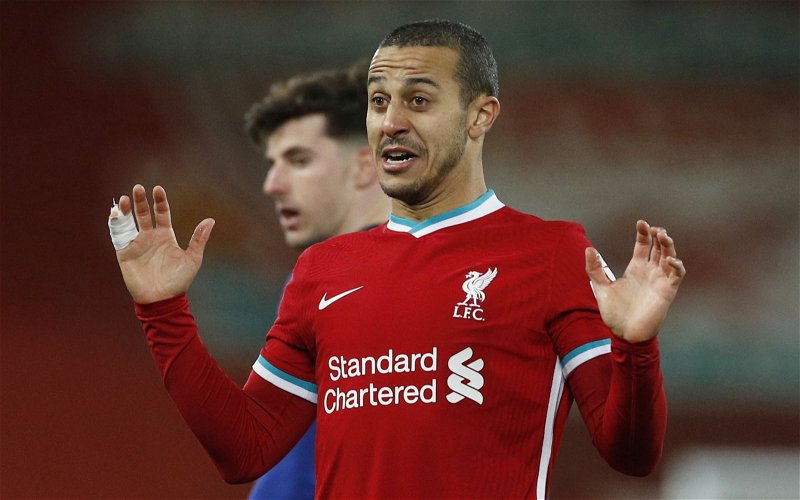 Liverpool manager Jurgen Klopp has hit back at the ‘rubbish’ suggestions that midfielder Thiago has behind the slump in form this season.

Upon signing the Spaniard in the summer transfer window there was unbridled joy amongst Reds supporters at landing a generational talent to transform their midfield.

However, things haven’t exactly gone to plan on Merseyside for the 29-year-old, whose return from a lengthy injury layoff coincided with Liverpool’s dramatic decline in form.

That brought about suggestions that the former Bayern Munich and Barcelona man was the protagonist for the drop-off, and certain quarters claimed the serial winner didn’t suit Klopp’s style.

The German boss has come out in stout defence, not for the first time, following Liverpool’s successful qualification into the UEFA Champions League quarter-finals.

When questioned by a German reporter in the wake of the match, Klopp said: ”I assume when you all look at Liverpool from Germany, people say it’s (the problems) to do with Thiago or whatever – that’s rubbish. For the players who were new, they always needed time to get used to our game plan but Thiago doesn’t have that. But he improves week on week.”

Klopp added: ”It is not a short-term project, it is a long-term project and it was good. It is very fluid how we work together, the boys played some nice passes and Thiago had a great chance as well, I think he could have had a shot on goal but instead passed.”

Thiago perhaps turned out his best performance since returning to fitness as Liverpool overcame RB Leipzig, winning seven ground duels and completing 100 per cent of long passes attempted whilst earning a rating of 7.7 (Sofascore).

Casting aspersions so early on the performances and suitability to a side of a player with the ability of Thiago, was always going to prove bold.

A technically gifted midfielder who over the fullness of time will almost certainly come good for the Reds, proving more than value for money at £25m.

Getting players like Fabinho and Jordan Henderson back alongside the Spanish star to take away some of the defensive burdens will be pivotal in extracting the best out of Thiago.