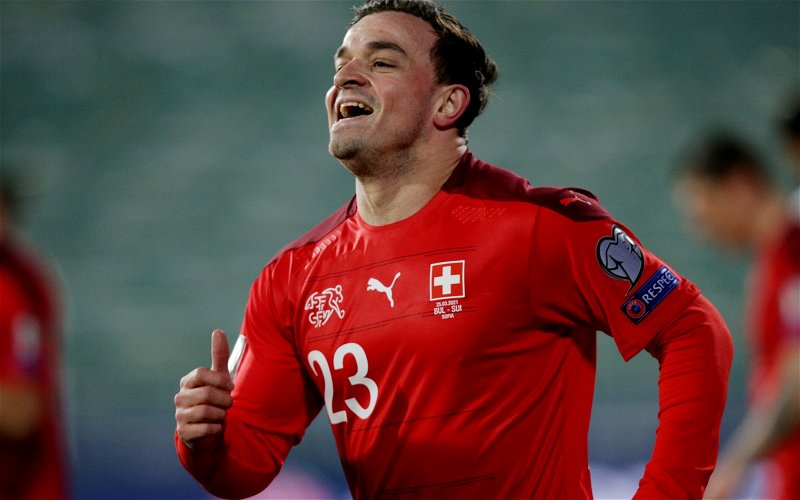 Xherdan Shaqiri has been earning high praise from football fans on social media after running the game for Switzerland on Thursday night.

The rarely seen Liverpool ace was influential for his nation as they overcame Bulgaria 3-1 in their opening 2022 World Cup qualifier.

With two assists and another big chance created, the 29-year-old impressed onlookers and earned a Sofascore rating of 7.9 in the process.

Injuries have rather hampered his time at Anfield, although this season the Swiss forward has remained relatively issue free, just missing nine matches earlier in the campaign with a muscle problem.

There are doubts whether Shaqiri will remain a Liverpool player beyond the summer, although performances such as the one for his national side could persuade Jurgen Klopp he is worthy of an enhanced role.

Xherdan Shaqiri with a massive performance tonight. Two assists and did all the work for Switzerland’s third goal, when they beat Bulgaria by 3-1. There’s so much football in Shaqiri on his good days, it’s actually incredible.

Man of the Match performance. pic.twitter.com/NDHTen6UBU

So where's this player for liverpool

Shaqiri with 2 assists for Switzerland too? pic.twitter.com/L6Aexluagf

Shaqiri can't get a game at Liverpool but goes to Switzerland and turns into prime Ronaldinho.

On his day Shaq is definitely a world beater, extremely talented player he could easily be a starter for a decent club