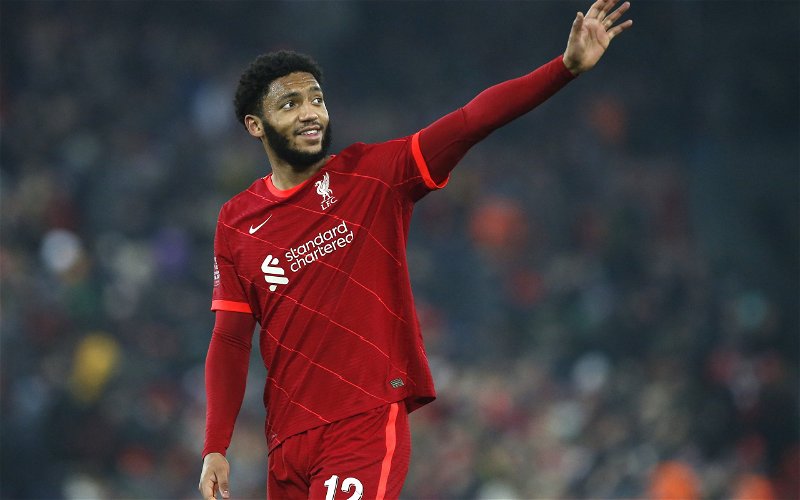 Liverpool defender Joe Gomez is reportedly preparing himself for a ‘big summer ahead’ with a move away from Merseyside most definitely a possibility.

The Lowdown: A fantastic servant

The 24-year-old first arrived at Anfield from Charlton back in 2015 for a fee of £3.5m and since that time, has gone on to make 136 appearances for the Reds.

The centre-back played the full 90 minutes of Liverpool’s FA Cup Quarter-Final against Nottingham Forest last weekend and despite his current contract not expiring until the summer of 2024, it appears that the 11-time international could be beginning a new chapter of his career come the end of the season, with Aston Villa and Newcastle United among those interested.

According to Spanish reports, it’s claimed that the former Premier League champions would be ‘open’ to listening to offers for Gomez for a sum believed to be in the region of the £25m mark.

The report also suggests that the Magpies would be happy to meet that criteria as a result of having some financial freedom since the recent club takeover.

Journalist Pete O’Rourke has since delivered a fresh claim on the situation to GIVEMESPORT.

“It’s a big summer ahead for Joe Gomez. He was obviously linked with a possible move to Villa in January and Liverpool decided to keep Gomez around.

“But he is probably the fourth choice centre-back at Anfield right now and that’s what Joe Gomez doesn’t want to be there. He wants to be playing regular first-team football.”

The Verdict: Time for a new start

Whilst the £85k-per-week star has enjoyed many successful campaigns at Anfield, it’s clear to see that his opportunities are now few and far between and so the summer will probably be the right time for him to think about moving on.

With the likes of Virgil Van Dijk and Joel Matip delivering some impressive performances of late, the 6 foot 1 defender has only made a total of 5 Premier League appearances all term, playing just 102 minutes of football, as per Transfermarkt.

When speaking to the media, Jurgen Klopp hailed the £22.5m-rated ace as ‘’outstanding’’, but with limited game time, it’s understandable that Gomez will want to be at a club where he is getting chosen to be in the starting XI, week-in, week-out, and should he be able to successfully start over somewhere else, this could also increase his chances of one day breaking back into the England squad.