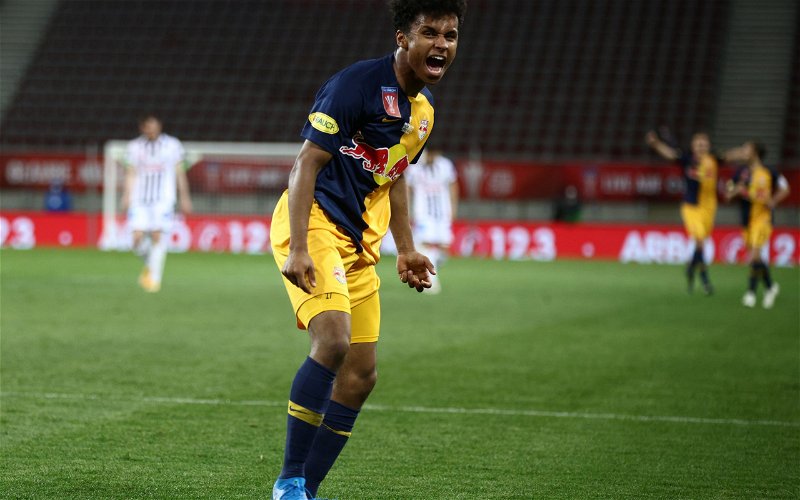 Liverpool are reportedly keen on Salzburg striker Karim Adeyemi, with manager Jurgen Klopp said to be ‘very interested’ in the 20-year-old.

The Lowdown: A hot prospect

The German youngster is a very talented prospect, delivering a whopping 19 goals and four assists from 36 appearances across the Austrian top-flight and the Champions League this season, as per Transfermarkt.

Adeyemi is set to be highly sought after and could have a busy summer window ahead of him.

The Latest: Klopp full of admiration

According to Sport Bild (via Sport Witness), the Reds are claimed to have been long established admirers of the £31.5m-rated star, but state that the majority of their attention actually comes through Klopp, who is said to be ‘very interested’ in the 5 foot 9 forward.

The article reports that Borussia Dortmund are currently the favourites for Adeyemi but with the deal having been ‘stalled for weeks’, Salzburg are now getting bored of waiting which could end up working well in Liverpool’s favour, should they be able to beat his former club in the race for his signature.

The Verdict: A signing for the future

As someone who has bags of potential and is still at such a young age, the three-cap international could prove to be a brilliant long-term attacking option for the Merseysiders.

The striker was already previously linked with a transfer to Anfield towards the end of last year and has been hailed as “one of the most exciting attacking wingers in football” by the Reds’ boss himself, so it would be no surprise to see the hierarchy going back in for him at the end of the campaign.

With Liverpool’s current front three not getting any younger, Salah (29), Mane (29), Firmino (30), the club should be looking for their successors sooner rather than later and Adeyemi could be the perfect fit to join the likes of Luis Diaz and Diogo Jota to lead the line in many years to come.

He won’t come cheap, however, with Transfermarkt currently estimating his value to be in the region of £31.5m.

In other news, Liverpool are facing competition in a bid to sign a £63k-per-week ace. Read more here.