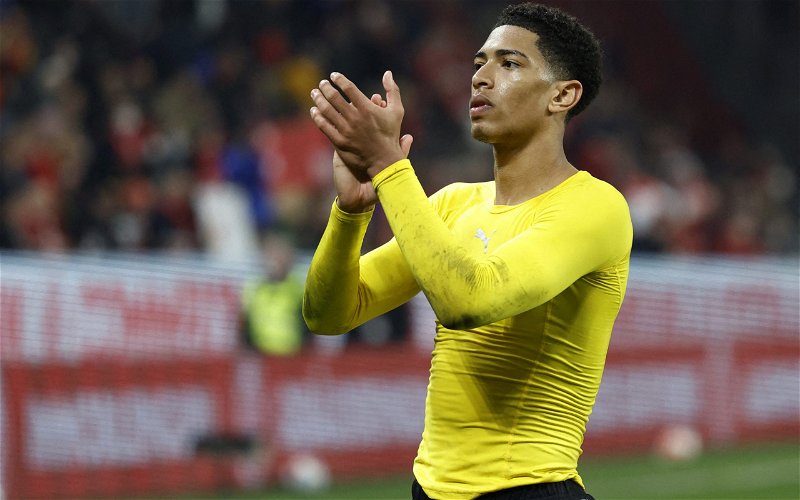 Liverpool have reportedly been linked with a move for Borussia Dortmund midfielder Jude Bellingham in the upcoming summer transfer window.

According to German outlet Sport Bild (via Sport Witness), it’s claimed that Jurgen Klopp has identified the England midfielder as a potential target, with the Reds holding ‘interest’ in signing the 18-year-old ace.

With Real Madrid also among the clubs monitoring the situation, it’s stated that the Premier League outfit could stand a better chance by going back in for him in 2023, but with the Bundesliga side looking to make ‘well over £100m’ from the sale, this would prove to be a costly signing for the Anfield club.

Being such a young age, whichever club Bellingham decides to join for the next chapter of his career will have some player on their hands, and should that be Liverpool, it wouldn’t be a surprise to see him become the next Jordan Henderson at Anfield.

Once described as a ‘’huge talent’’ by his former Birmingham manager Pep Clotet, the ten-time international has provided a total of ten goal contributions in 25 league outings for Dortmund so far this season and as a result, has earned himself an overall rating of 7.18, making him their third-highest ranked player underneath the free-scoring Erling Haaland and the more creative Marco Reus, as per WhoScored.

The Reds’ captain first arrived on Merseyside from Sunderland back in 2011 and has since gone on to make 433 appearances for his side, with a potential future move for Bellingham having the ability to mirror that.

Henderson, 31, will not be around forever and it could pay to find his long-term successor sooner rather than later and that could well be in his international teammate.

Speaking exclusively during a recent interview with SPORTbible, Henderson himself even hailed his fellow Englishman, suggesting that the ‘’sky is the limit’’ for him.

He went on to say ‘’I like the way he plays. I like his personality, which is the most important thing. I like the way he conducts himself. I’ve got nothing but good things to say about him.

‘’He’s still very young, he’s doing so well at Dortmund [and] he’s done well whenever he’s played for England. For me, let’s just let him play football. Let him enjoy it because he is such a special talent.

“Yes, he’s got leadership qualities for sure but there’s no need to put that pressure on him right now. Let him grow into the person that he can be on his own. He’s got his feet firmly on the ground [and] has such maturity for a young player.

“I know in my own mind that he’s going to be a top player.”

This kind of praise will no doubt only fuel speculation of a move to Anfield even more, but should the financial aspect be viable for the club, then the Liverpool hierarchy should move quickly to seal a deal in order to bolster their midfield options, with the £67.5m-rated star having the potential to go on to have a long and exciting future with the 19-time Premier League champions.

In other news, Jurgen Klopp is facing a selection dilemma after a recent huge injury blow. Read more here.