Liverpool eyeing up a move for Watford winger Ismaila Sarr 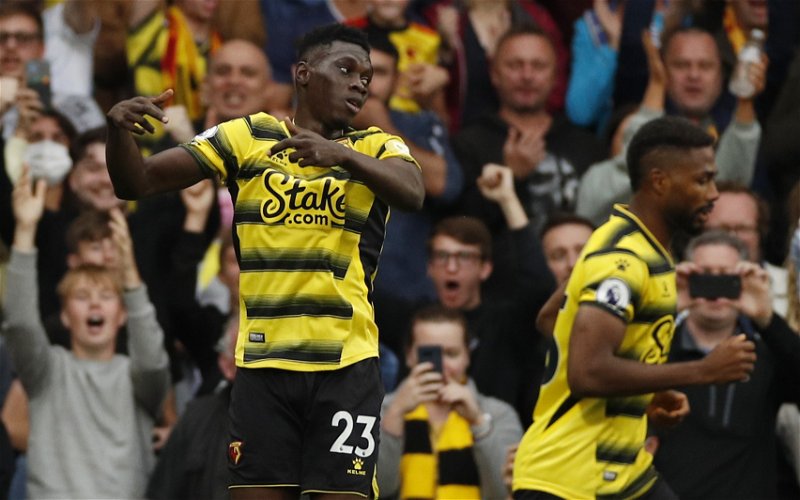 Liverpool are reportedly eyeing up a move for Watford winger Ismaila Sarr in the upcoming summer transfer window.

According to Italian source Corriere Dello Sport, the Reds are said to be ‘on the trail’ of the 6 foot forward but face fierce competition from AC Milan in the race for his signature.

The Senegalese’s agent has also made it clear that he will more than likely be bidding farewell to Vicarage Road at the end of the season, saying ‘’Ismaila has a lot of chances to start in the summer regardless of how Watford’s season ends. That’s what we planned.’’

With Divock Origi having recently been linked with a move away from Anfield and with the possibility that he is edging ever closer to an exit, Sarr might just prove to be the perfect replacement.

The 39-time international has provided a total of six goal contributions in just 16 appearances in the Premier League for the Hornets this campaign, compared to Origi’s two goals in five after experiencing very limited game time under Jurgen Klopp, showing just how much of an influence he can have on a team.

When you look at the age of the former Champions League winners’ current wingers, Mohamed Salah (29) and Sadio Mane (29), Sarr is only 24-years-old and with his potential and the fact that he will still have many years ahead of him, this could prove to be a brilliant long-term attacking option for the club.

Speaking to Football Insider, pundit Kevin Phillips has tipped Liverpool to launch a move for the £63k-per-week star. He said:

‘’Liverpool want to be challenging this season though and I fear they haven’t got the depth in their squad to cope with an injury to Mane or Salah. They might have to dip into the transfer market to bring someone in who is going to give them goals.

‘’I don’t know whether [Jurgen] Klopp could rely on Origi and Minamino. Sarr is certainly a top-quality player and he would definitely be an upgrade on what Liverpool currently have in reserve.”

Averaging 2.1 shots per game, this shows that he is a constant threat on the wing and could be exactly what Liverpool are looking for should any of their options up top make way this summer.