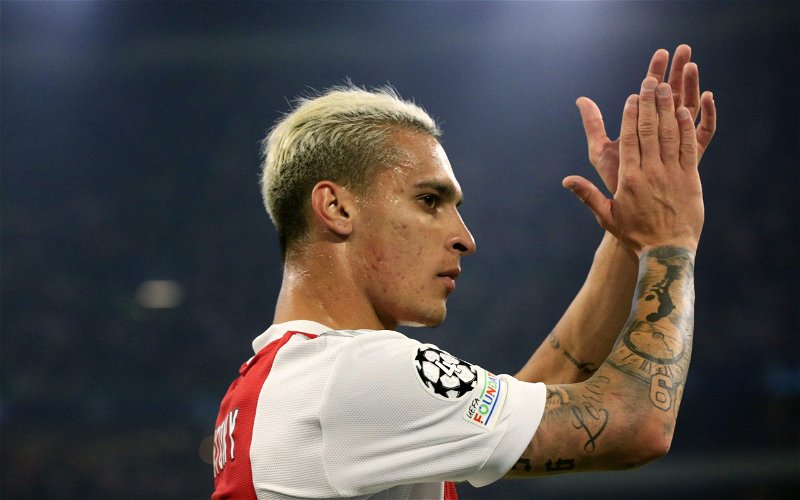 Liverpool are set to face stiff competition in a bid to try and sign Ajax winger Antony during the upcoming summer transfer window.

The Lowdown: A talented prospect

The 22-year-old has been in fine form for the Eredivisie club so far this season, making a total of 22 goal contributions in just 23 appearances, as per Transfermarkt, making him one of the hottest current prospects in Europe.

The nine-time international’s contract with the Dutch side isn’t set to expire until 2025, but now it seems that after just two years since his arrival in the Netherlands, Antony’s departure from the club might be edging ever closer.

The Latest: Plenty of interest

According to French source Le10sport, PSG have now joined the race for the £19k-per-week star, with the report stating that they are becoming increasingly ‘active’ for the forward and that the Ligue 1 side’s management have made plans to ‘launch the first steps’ towards the player and his agent.

The Reds are also among a host of Premier League clubs who have recently been linked with Antony, with the Anfield scouts said to be ‘hugely impressed’ by his progress and have reportedly been ‘watching’ him ever since his Sao Paulo days.

The Verdict: Get it over the line

Despite the Merseyside club already having plenty of wide attacking options, it’s clearly not stopped the Reds from looking elsewhere to bolster their squad, and considering that Mohamed Salah and Sadio Mane both turn 30 later this year, it’s obvious that the hierarchy are now thinking about what the future might look like.

Once hailed a “brilliant” player by former Premier League goalkeeper Paul Robinson, the Brazilian has been displaying some impressive performances in the Champions League this campaign, netting two goals and registering four assists in seven outings for Ajax, and just as Liverpool had to move for Luis Diaz earlier than expected back in January because of other teams’ interest, this could well be a case of having to do the same again.

He has also been lauded for his “wonderful” technical ability by Chelsea’s veteran Dutch scout Piet de Visser to  Voetbal International (via Football Oranje).

Valued at £31.5m and still at such a young age, Antony could prove to be a brilliant long-term signing for Jurgen Klopp and could potentially find himself leading the line alongside the likes of Jota and Diaz in years to come.

In other news, a Sky Sports pundit has made a surprise Liverpool admission ahead of the Premier League run-in. Read more here.