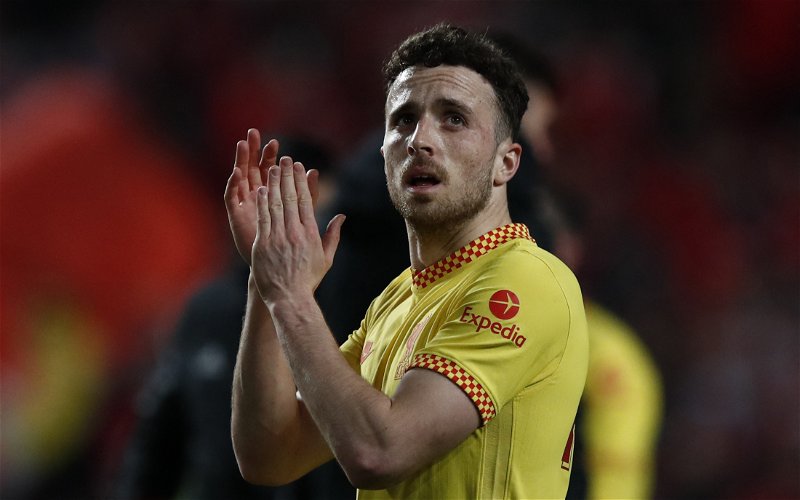 During the Reds’ Champions League tie against Benfica earlier this week, Diogo Jota was forced off the pitch after sustaining a knock, which came as an initial concern to all associated with the club.

However, the boss has since shared some positive news on the situation and is hopeful that the 25-year-old will be fit and available for selection again ready in time for the weekend.

When asked for a squad fitness update during his pre-match press conference on Thursday, the German said:

“I said last night that Diogo got a knock – that swelled up slightly directly after the game, obviously while I was in the press conference.

“Diogo, good chance he will be alright but we need to have a closer look tomorrow. That’s it.”

If the Portugal-born talent can come back into contention, then this would come as a huge boost for the Anfield outfit, who will need to have all of their best attacking options accessible to them, should they want to progress to the final.

The £54m-rated ace has only made three FA Cup appearances this season, but in those outings has managed to score two goals and provide one assist, as per Transfermarkt, showing just how much of a threat he can be in the final third.

Jota has also managed to carry this excellent run of form over to the Premier League, where he is currently Liverpool’s second-highest goalscorer with 15, just behind Mohamed Salah who’s on 20. The 24-time international is averaging 2.6 shots and 1.1 key passes per 90 minutes, via WhoScored.

And according to Reds legend Steve Nicol, he is a handful for an opponent’s backline. Speaking during an interview with ESPN earlier this year, the former right-back said:

“For a defender, he’s an absolute nightmare. You never know where he is. He never stays in one place. All of a sudden the ball will pop up in the box and guess who’s there first – Diogo Jota.

“He has that natural instinct of knowing where to be at the right time and from a defender’s point of view, absolute nightmare.”

Should the Merseysiders make it through to the final, then they will be one step closer to getting their hands on yet another piece of silverware, in the hope of achieving that unprecedented quadruple.

In other news, Liverpool are set to face competition to sign a £49.5m-rated star this summer. Read more here.