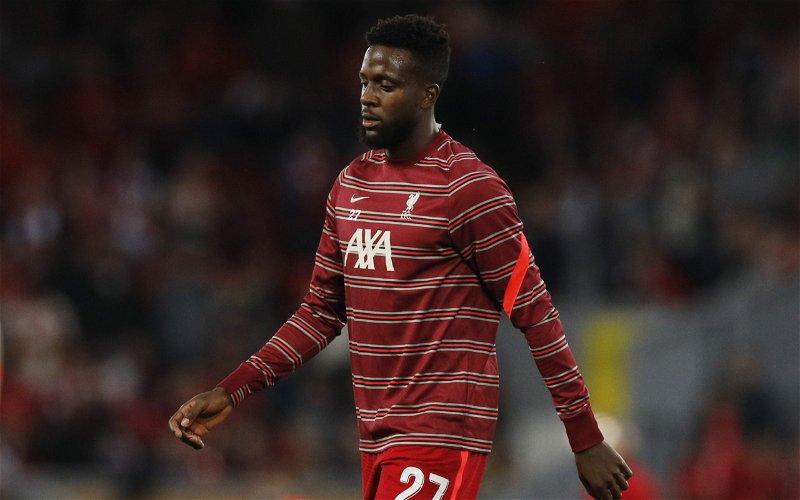 Liverpool striker Divock Origi is edging ever closer to an Anfield exit this summer, amid reports of an agreement being reached with AC Milan.

The Lowdown: Heading for the exit

The 26-year-old first arrived on Merseyside back in 2014 and has been a brilliant long-term servant for the Reds, but with a lack of game time, having only made five league appearances so far this season, it’s understandable that the forward would want to look elsewhere in a bid to revive his career.

Origi has been linked with a move away from Liverpool on multiple occasions these past few months, but after a fresh update, it now looks highly likely that he will be departing in the upcoming transfer window.

The Latest: Close to a done deal

According to journalist Alfredo Pedulla, it’s claimed that there is an agreement between the player and the Serie A outfit.

As the source states, it’s reported that the arranged fee for the Belgian is £4m per season.

“#Origi – #Milan : contacts also in the last 48 hours, agreement set at 4 million per season including bonuses, no signatures” he tweeted.

The Verdict: Right time to go

As influential as Origi has been for the Reds over the last eight years, now is probably the right time for him to leave and begin a new chapter elsewhere.

The £10.8m-rated ace, once dubbed a “monster” by ex-City colossus Vincent Kompany, has provided a total of 57 goal contributions in 171 appearances for Jurgen Klopp’s side, but since the arrivals of Luis Diaz and Diogo Jota, has seen himself fall down the pecking order and as a result, has only played 533 minutes of football in all competitions this campaign.

Averaging 1.9 shots per game across all tournaments, as per WhoScored, this shows that the 32-time international can still be a threat in front of goal and so should he be available on a free transfer, would be an absolute bargain for any team looking to win the race for his signature.

Recently described as having “unquestionable” talent by former Liverpool boss Rafa Benitez, Origi has given Reds fans plenty of incredible memories, in particular his goal in the 4-0 Champions League victory over Barcelona, and there’s no doubt that he will go down as an Anfield hero in years to come.

In other news, Jurgen Klopp has delivered an injury update ahead of Liverpool’s clash against Benfica. Read more here.