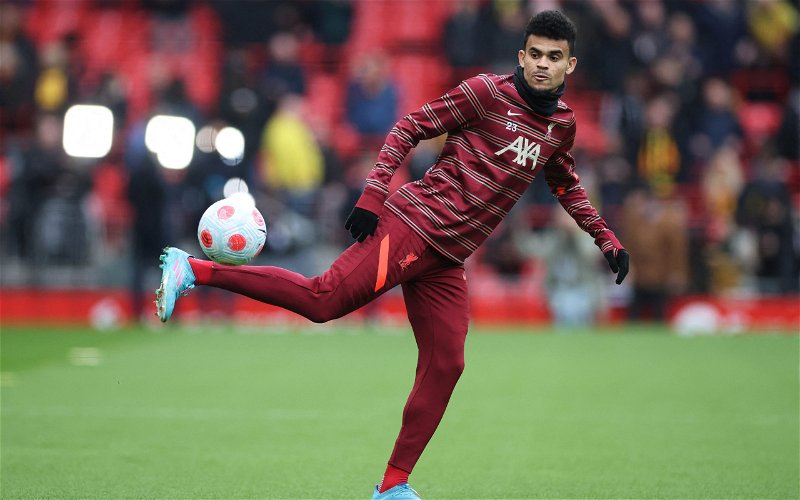 Sky Sports pundit Gary Neville has been giving his thoughts on Luis Diaz after the winger helped his Liverpool team secure a 4-0 victory against Manchester United.

The Lowdown: On the scoresheet

The 25-year-old was named as part of the starting XI that lined up to take on the Red Devils on Tuesday night, and the Colombian was influential for the Anfield outfit, scoring the opening goal after just five minutes, as well as providing an assist for his teammate Sadio Mane after the break.

Despite being a former United player and fan of his boyhood club, the commentator couldn’t help but admit that he felt sad after the game as a result of Diaz being an extremely talented prospect.

Speaking during the latest episode of the Gary Neville podcast post-match, the ex-defender said:

“From the moment I saw him (Diaz) play in the Carabao Cup final, which was the first time I’d seen the lad live, until you see a player live and particularly when I look at him, he’s playing off the left-hand side and I look at it from a right-back’s perspective.

“So, I have a pretty good eye about what I wouldn’t have liked and what I would like – I thought ‘oh my God, what a player he is!’

“His tenacity, his skill, his pace, his fight, his spirit, everything! He’s cost not a lot again. They (Liverpool) have found another one!”

Since arriving on Merseyside from Porto back in the January transfer window, the Colombian has majorly impressed from working under Jurgen Klopp and has become a new favourite amongst fans, even though he’s only been at the club for such a short amount of time.

The £40.5m-rated ace has already recorded six goal contributions in just 17 outings across all competitions for the Reds and looks a threat every time he enters the box with the ball at his feet.

According to WhoScored, Diaz currently averages 2.8 shots, 1.5 key passes, and two successful dribbles per Premier League game, which just highlights the fact that he is someone who would be a nightmare to have to try and defend against.

Former Liverpool midfielder Danny Murphy has also been impressed by what he’s seen of the forward so far, and believes that the £100k-per-week talisman is full of confidence. He said:

“Full of running, he plays free, no fear. He’s physically capable, he’s quick – both ways – more than willing to work and run in behind.

“To walk into a club like Liverpool and just have the self-belief, midseason, to play with the kind of players he’s playing with. He’s not been intimidated. We were talking earlier about [Jack] Grealish moving to City and feeling a bit [intimidated]. Certainly not this fella.”

Diaz has only experienced the playing style of English football for a couple of months now but has already caught the eye, and with many of his prime years still left ahead of him, he will only continue to grow and will undoubtedly become a future Reds hero in seasons to come.

In other news, a Liverpool transfer target has recently dropped a huge hint on his future. Read more here.